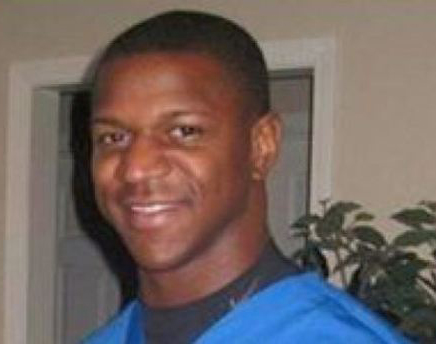 Another dead black man. Another mysterious death. Another federal investigation.

And yet, there are no immediate answers for why Alfred Wright, a 28-year-old physical therapist and a married father of three, was found dead in a field in Jasper, Texas.

What makes this case more curious — and insidious — is that Wright was mutilated: his eyes were missing, part of his ear was hacked off; some of his teeth were ripped out – and his tongue was taken.

Wright’s family believes Wright was a victim of a racist murder. Wright’s wife, Lauren, is white, and there was also a widespread rumor that Wright was having an affair with a relative of a white police officer. Lauren Wright says she does not believe her husband was having an affair, according to local news reports.

“For me, the most frustrating thing has been not knowing what happened,’ Lauren Wright told reporters. “We don’t have closure.”

Wright disappeared on Nov. 7, 2013. Search volunteers found his body after local law enforcement officials gave up the search after three days. The U.S. Department of Justice has correctly decided to investigate Wright’s death, which deserves a thorough probe.

But here’s what’s troubling: Two autopsies by Texas officials yielded little information about what happened to Wright. Police, forensic experts, and homicide detectives can’t get the bottom of Wright’s death. Initially, though Wright was found in his boxer shorts, his cell phone tucked in his sock, and the injuries described above, police said his death was a drug overdose.

The case has become so muddled and mishandled that Wright’s family hired a private investigator, Chuck Foreman, who is helping the family dig for answers.

“This has been the worst investigation I’ve ever seen in my life,” said Foreman, an Army Special Operations veteran. “The sheriff’s department never searched his truck, they never did a neighborhood canvas.”

So here’s what we know: Foreman says that Wright called his wife and parents to say that his truck had broken down, but when his parents came to pick him up, Wright had disappeared. Even though Wright was under indictment for allegedly embezzling $1,000 when he worked at a bank while attending college in Tennessee, local law enforcement authorities dismissed foul play. (His lawyer in that case says that at most, if convicted, Wright would have faced probation.)

“They kept saying that it was staged, that he was on the run,” Foreman, who is the president of the Center for Search and Investigation, a Texas-based group that helps search for missing children, told CBS News’ Crimesider.

“They kept saying it was drug-induced behavior,” Foreman says. “But nobody ever witnessed him doing drugs, and he has no drug-related criminal history.”

Some whisper that Wright could have been murdered because he was married to a white woman in a Texas town where not everyone is racially tolerant.

Other inconsistencies have emerged. The first autopsy called Wright’s death an accident, but his family never believed it. They ordered a second autopsy by Dr. Leeann Grossman who said she has “a high index of suspicion that this is a homicide.”

Lee wrote that local law enforcement officials dropped the search after three days and noted that Wright is from Jasper, Texas, a town also known for the racially-motivated death of James Byrd, a black man who was dragged to death by whites in 1998.

“This case appears to bear the indicia of a suspicious crime in which an African-American male is yet again the victim of an act of lethal violence,” Jackson Lee wrote. “Despite credible and overwhelming evidence to the contrary, local law enforcement officials ruled the death … as ‘accidental’ and ceased their investigation.

Equally troubling is the fact that one of the last persons to see Alfred Wright alive is a Sabine County law enforcement officer … who, according to the Wright family, has yet to be questioned fully by investigators.”

Jasper, a small town about 130 miles north of Houston, has a population of 7,590 residents, according to the 2010 U.S. Census. Somebody knows something about Wright’s death.

“It’s important to have some people who aren’t from this area to take a look at it because there’s just too many questions that remain unanswered,” Bernsen said.

Now, perhaps, after this tragic incident, the Wright family will get the answers they need – and the justice they deserve.