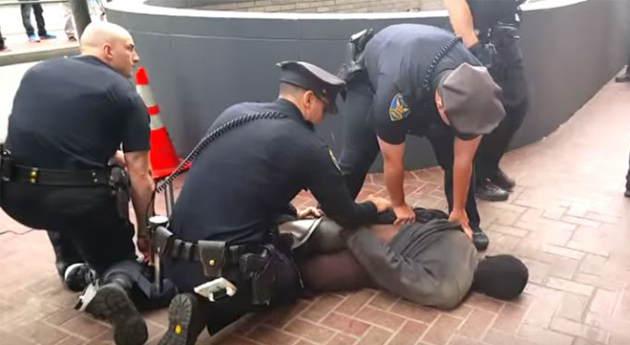 OK, straight up, this is not a good look for cops and the San Francisco Police Department in particular.

We’re still scratching our head trying to figure why it took 14 … yes, 14 mostly white cops to subdue one unarmed black homeless man. Oh yeah, did we mention that not only was he unarmed, he only has one leg and is on crutches.

Label this another case of police brutality, fear and stupidity.

The incident happened on August 4. Looking at the video you can see the unnecessary force used by police to continuously pin the disabled man down as he struggles to move.

Unfortunately for the cops, the incident was captured on video posted by journalist Chaedria LaBouvier via Medium, a popular blogging site, and shows the SFPD officers taking the man down on Market Street in downtown San Francisco. According to witnesses, police were called in to the scene to take care of a suspicious man waving some “sticks” around, reports Russian news site, RT.

“These are my crutches. I use these to walk,” the man tried to explain. But even after realizing that the man had a prosthetic leg, the police continued to use overwhelming physical restrain and man-handled him, forcing his head to the ground.

In further efforts to subdue a man already on the ground with four people on top of him, the officers stood on his prosthetic leg and “twisted it around even after they had cuffed him and pinned him to the piss-stained concrete,” LaBouvier noted.

Beaten to the ground, the suspect at one point said, “what the f**k is you doing this to me?” as more officers arrived to form a cordon around the incident area. “Is this respectable? When I say ‘no’, is this what you do to me?” the man said.

Around 6 minutes into the footage, the suspect began saying that he was in pain from the take-down and claimed he had been suffering from an infectious sore on one of his legs.

At one point, fearing for his life, the man said said “they’re going to shoot me”. A witness replied: “They ain’t gonna shoot you man, that’s why we have these cameras out here.”

Like we said at the top, this is not a good look for the cops. In fact, it’s absolutely horrible and another case of blatant police brutality.

For what it’s worth, on the video witnesses can be heard speaking out against the over zealousness police demonstrated, but to no avail as cops continued to abuse the one-legged man. While filming the incident, LaBouvier can be heard noting the “lack of respect” for the suspect as his clothes were pulled off during the incident. An absolutely disgraceful scene.