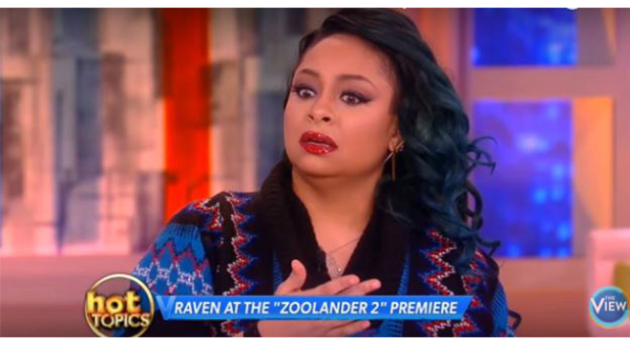 Apparently, that question got answered in the worst way for Symoné, who ended up literally and physically taking a backseat to Jenner.

Needless to say Miss Raven didn’t take kindly to what happened and put the incident on blast on “The View.” According to the former “Cosby Show” star, she was being interviewed at the New York premiere of Ben Stiller’s new film “Zoolander 2” when a producer physically shoved her out of the way to make room for Kendall Jenner.

“I understand that there’s rise and fall of people’s celebrity,” Symoné explained. “I get it and I respect people that get it, HOWEVER, I’m doing an interview with someone and the producer of this show goes like this, ‘Move! Move! Get Kendall! Get out of the way!”

Despite the producer’s rudeness, Symoné ended up staying positive as she shared some advice on what that person could’ve done to smooth things over to avoid handing out disrespect.

“You could have kindly [said], ‘Excuse me. Kendall Jenner is coming. I need to interview her,’ and I [would] wait, but don’t slap me upside the chest … I got hit twice,” said Symoné.

However, new video shows that Raven-Symonè was quite as manhandled as she described, although what happened WAS pretty rude.

Meanwhile, “The View” the co-host also had some thoughts Beyonce’s ‘Formation’ video that are raising eyebrows, too:

“The new video from Beyonce is hilarious and amazing, and all the Beyhives will be coming for me, but I miss Beyonce singing a ballad in a dress. I miss that girl singing. I’ve seen you dance, I miss you. Where’s the ‘Me, Myself and I?’”

To see Raven-Symoné’s recap of being sidestepped in favor of Kendall Jenner, check out the video: