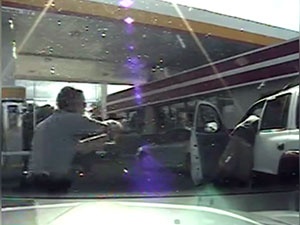 COLUMBIA, S.C. (AP, WIS) —A former state trooper faces a felony charge in the shooting of an unarmed man during a traffic stop in Columbia earlier this month.

The State Law Enforcement Division said in a news release that 31-year-old Sean Groubert was charged Wednesday with assault and battery of a high and aggravated nature. He faces up to 20 years in prison if convicted.

In the video released Wednesday night, Groubert asks for Jones’ license. Jones then checks his back pocket before going back to his vehicle.

Groubert then fires several shots at Jones before Jones falls to the ground.

While Jones is on the ground with a gunshot wound to the hip, he asks Groubert “What did I do, sir?”

Groubert then asks Jones if he was hit.

“I don’t know what happened,” Jones says in the video. “I just grabbed my license.”

Groubert explains to Jones the reason he shot at him was because Jones dove head first in the vehicle. Groubert was fired last week.

The arrest warrant says video and statements show the shooting was not justified.

Barney Giese, Groubert’s defense attorney, said there’s more than one way to interpret the video and told the judge Wednesday his client is not guilty and was justified in shooting Jones who was reaching for his license.

Giese, who served as the 5th Judicial Circuit Solicitor for the past 16 years, said Jones reached for his license “aggressively” and Trooper Groubert thought he was reaching for a gun.