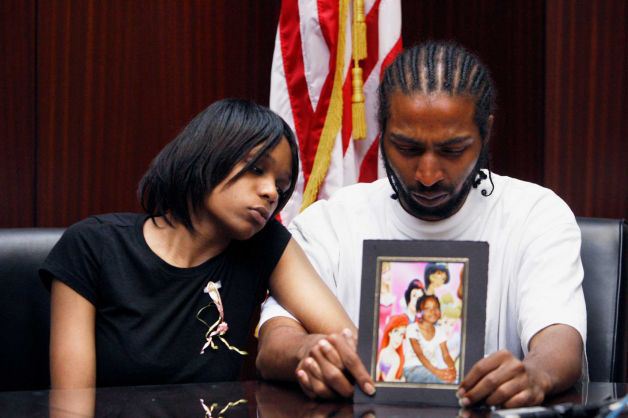 DETROIT (AP) — A member of an elite Detroit police team failed to follow his training when he stormed a house looking for a murder suspect with his finger on the trigger and shot a 7-year-old girl who was asleep on the couch, a prosecutor said Thursday at the start of an involuntary manslaughter trial.

All sides acknowledge that Aiyana Stanley-Jones’ death was not intentional. But prosecutors say Officer Joseph Weekley’s actions in 2010 were a crime because he handled his submachine gun in a reckless manner.

It is Weekley’s second trial, coming 15 months after another jury failed to reach a verdict.

“There’s a lot of noise in this case — the media, finger-pointing — but it comes down to one simple thing: Was the defendant grossly negligent when he pulled the trigger on his gun?” prosecutor Rob Moran told jurors.

“You have to use ordinary care in the exercise of your duties,” Moran said. “He didn’t follow ordinary care. … If he didn’t pull the trigger, Aiyana would be alive.”

Weekley has said he mistakenly fired the gun while trying to wrest it away from Aiyana’s grandmother, Mertilla Jones, seconds after he led a pack of officers into the home around midnight to find a murder suspect.

Jones denies any interference, but her credibility is a cornerstone of Weekley’s defense. Defense lawyer Steve Fishman plans to highlight some of her provocative statements before the first trial, in which she accused police of intentionally killing Aiyana.

“When you hear a lie of that nature, a lie so outrageous, you shouldn’t trust” her testimony, Fishman told the jury.

Aiyana’s death capped a chaotic night. With a reality TV crew outdoors, Weekley and other members of Detroit’s Special Response Team raided the home in riot gear after first throwing a stun grenade through a window. It released smoke, bright light and vibrations to confuse anyone inside.

“It was an accident,” Fishman said of the shooting. “Mertilla Jones did something — hit the gun, reached for the gun. Gun safety is important but also making sure no one gets a hold of your weapon is important as well.”

The trial’s second witness, Aiyana’s mother, Dominika Stanley, fought back tears as she recalled the night. She said police stopped her from immediately going to the hospital to see her daughter.

During three days of jury selection, candidates were asked about race and the recent shooting of the unarmed, black 18-year-old Michael Brown by a white officer in Ferguson, Missouri.

Weekley is white, and Aiyana was black. Jurors agreed that race and the Ferguson shooting are irrelevant in the Detroit trial.