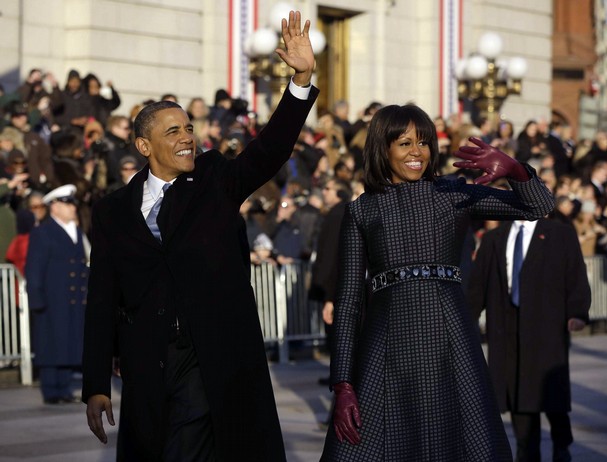 President Barack Obama and first lady Michelle Obama waves as they walk down Pennsylvania Avenue near the White House during the 57th Presidential Inauguration parade Monday, Jan. 21, 2013, in Washington.

Turning the page on years of war and recession, President Barack Obama summoned a divided nation Monday to act with “passion and dedication” to broaden equality and prosperity at home, nurture democracy around the world and combat global warming as he embarked on a second term before a vast and cheering crowd that spilled down the historic National Mall.

“America’s possibilities are limitless, for we possess all the qualities that this world without boundaries demands,” the 44th president declared in a second inaugural address that broke new ground by assigning gay rights a prominent place in the wider struggle for equality for all.

In a unity plea to politicians and the nation at large, he called for “collective action” to confront challenges and said, “Progress does not compel us to settle centuries-long debates about the role of government for all time — but it does require us to act in our time.”

Elected four years ago as America’s first black president, Obama spoke from specially constructed flag-bedecked stands outside the Capitol after reciting oath of office that all presidents have uttered since the nation’s founding.

The events highlighted a day replete with all the fanfare that a security-minded capital could muster — from white-gloved Marine trumpeters who heralded the arrival of dignitaries on the inaugural stands to the mid-winter orange flowers that graced the tables at a traditional lunch with lawmakers inside the Capitol.

The weather was relatively warm, in the mid-40s, and while the crowd was not as large as on Inauguration Day four years ago, it was estimated at up to 1 million.

Big enough that he turned around as he was leaving the inaugural stands to savor the view one final time.

“I’m not going to see this again,” said the man whose political career has been meteoric — from the Illinois Legislature to the U.S. Senate and the White House before marking his 48th birthday.

On a day of renewal for democracy, everyone seemed to have an opinion, and many seemed eager to share it.

“I’m just thankful that we’ve got another four years of democracy that everyone can grow in,” said Wilbur Cole, 52, a postman from suburban Memphis, Tenn., who spent part of the day visiting the civil rights museum there at the site where the Rev. Martin Luther King Jr. was assassinated in 1968.

The inauguration this year shared the day with King’s birthday holiday, and the president used a Bible that had belonged to the civil rights leader for the swearing-in, along with a second one that been Abraham Lincoln’s. The president also paused inside the Capitol Rotunda to gaze at a dark bronze statue of King.

Others watching at a distance were less upbeat than Cole. Frank Pinto, 62, and an unemployed construction contractor, took in the inaugural events on television at a bar in Hartford, Conn. He said because of the president’s policies, “My grandkids will be in debt and their kids will be in debt.”

The tone was less overtly political in the nation’s capital, where bipartisanship was on the menu in the speechmaking and at the congressional lunch.

“Congratulations and Godspeed,” House Speaker John Boehner, a Republican, said to Obama and Vice President Joe Biden as he presented them with flags that had flown atop the Capitol.

The crowds were several rows deep along parts of the route, and security was intense. More than a dozen vehicles flanked the president’s limousine as it rolled down Pennsylvania Avenue, and several agents walked alongside on foot.

As recent predecessors have, the president emerged from his car and walked several blocks on foot. His wife, Michelle, was with him, and the two held hands while acknowledging the cheers from well-wishers during two separate strolls along the route.

A short time later, accompanied by their children and the vice president and his family, the first couple settled in to view the parade from a reviewing stand built in front of the White House.

A pair of nighttime inaugural balls completed the official proceedings, with a guest line running into the tens of thousands.

In his brief, 18-minute speech, Obama did not dwell on the most pressing challenges of the past four years. He barely mentioned the struggle to reduce the federal deficit, a fight that has occupied much of his and Congress’ time and promises the same in months to come.

He spoke up for the poor — “Our country cannot succeed when a shrinking few do very well and a growing many barely make it” — and for those on the next-higher rung — “We believe that America’s prosperity must rest upon the broad shoulders of a rising middle class.” The second reference echoed his calls from the presidential campaign that catapulted him to re-election.

“A decade of war is now ending. An economic recovery has begun,” said the president who presided over the end to the U.S. combat role in Iraq, set a timetable for doing the same in Afghanistan and took office when the worst recession in decades was still deepening.

“We will support democracy from Asia to Africa, from the Americas to the Middle East, because our interests and our conscience compel us to act on behalf of those who long for freedom,” he said in a relatively brief reference to foreign policy.

The former community organizer made it clear he views government as an engine of progress. While that was far from surprising for a Democrat, his emphasis on the need to combat global climate change was unexpected, as was his firm new declaration of support for full gay rights.

In a jab at climate-change doubters, he said, “Some may still deny the overwhelming judgment of science, but none can avoid the devastating impact of raging fires and crippling drought and more powerful storms.” He said America must lead in the transition to sustainable energy resources.

He likened the struggle for gay rights to earlier crusades for women’s suffrage and racial equality.

“Our journey is not complete until our gay brothers and sisters are treated like anyone else under the law — for if we are truly created equal, then surely the love we commit to one another must be equal as well,” said the president, who waited until his campaign for re-election last year to announce his support for gay marriage.

His speech hinted only barely at issues likely to spark opposition from Republicans who hold power in the House.

He defended Medicare, Medicaid and Social Security as programs that “do not make us a nation of takers; they free is to take the risks that made this country great.”

He referred briefly to making “the hard choices to reduce the cost of health care and the size of our deficit,” a rhetorical bow to a looming debate in which Republicans are seeking spending cuts in health care programs to slow the rise in a $16.4 trillion national debt.

He also cited a need for legislation to ease access to voting, an issue of particular concern to minority groups, and to immigration reform and gun-control legislation that he is expected to go into at length in his State of the Union speech on Feb. 12.

But his speech was less a list of legislative proposals than a plea for tackling challenges. .

“We must act, knowing that our work will be imperfect,” he said, and today’s “victories will only be partial.” .

There was some official business conducted during the day.

Moments after being sworn in, the president signed nomination papers for four new appointees to his Cabinet, Sen. John Kerry for secretary of state, White House chief of staff Jacob Lew to be treasury secretary, former Nebraska Sen. Chuck Hagel for defense secretary and White House adviser John Brennan to head the CIA.