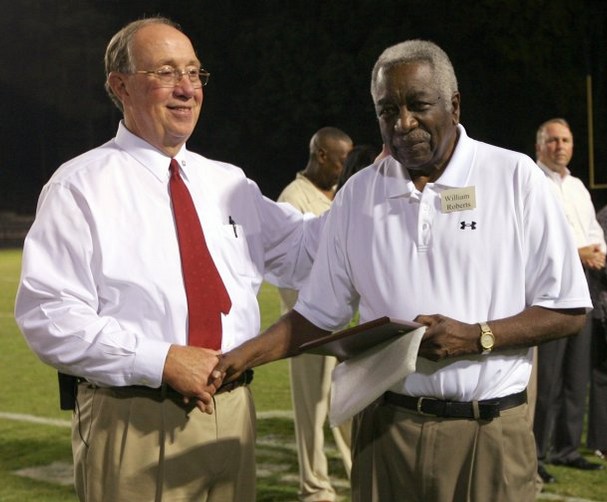 Coach William Roberts was a quiet man who could say a lot with just a look when he was on the court with his players at Westside High School.

Roberts coached at Westside High School for 47 years, from 1951 until 1998. He died Monday at the age of 87 after a battle with dementia and Alzheimer’s.

On Monday, he was remembered for his leadership style.

“He was a quiet-type person. But he could give you that look,” said Al Norris, a former Westside High athlete. “I knew when I got the look I was headed to the bench. I learned from him that I had to work hard to have any kind of success.” That discipline and focus on the basics of the game led him and his teams to winning 1,193 games and 13 state championship titles in his career at Westside High. He was inducted into the South Carolina Athletic Coaches Association Hall of Fame in 1998. The gym at Westside High bears his name.

One of his star players, Saudia Roundtree, went on to the University of Georgia, where she was named National Player of the Year in 1996.

He was also remembered for his dedication and the care he showed his students. “I remember a many a day where he would go to the store and buy a drink and a cinnamon roll for us so we could get through practice,” Norris said. Others remembered him for the time he spent picking children up and taking them to practice. He also sponsored sports clinics for children at the Anderson Recreation Center in the summer. And he was on the board of directors for HeadStart when it was being established in Anderson, Norris said.

“You could always see him,” said Westside High Principal Henry Adair. “He would be at the recreation center, the church league basketball games, and even other high schools. He loved being around the profession and watching the games.” Roberts was raised in a family of seven children in Nashville, Tenn. He played basketball in high school and was the manager of the basketball team at his alma mater, Fisk University. He was drafted into the U.S. Army in the last months of World War II.

Coaching was what he wanted to do, said his oldest son, Anderson Mayor Terence Roberts. When he was discharged from the Army, he came to Anderson for a job interview. Roberts went to work at Westside High the year it opened on Southwood Street. He stayed when the campus moved to its current location in the 1970s. It is where he met his wife, Linda Roberts, and they raised their four sons, Todd, Ken, Kory and Terence.

William Roberts spent his entire career at the one school. “I think he toyed with the idea of going to college to coach,” Terence Roberts said. “But Westside was a big part of his life. People would ask him, ‘Why did you coach so long?’ And he said, ‘I won and it was fun.’” He coached boys’ basketball, girls’ basketball, football, and girls’ track and field. He was also a math teacher and a physical education teacher.

Al Norris, who is now a veteran Anderson School District 5 board member, said he remembers those early days when Roberts was coaching and teaching at the old Westside High campus. He taught the calculus class at Westside High in those early years. “He was very scholarly,” Norris said. “He taught the first calculus class, and he had one student, Marvin Morris, who went on to be a pilot in the U.S. Air Force.”

Both co-workers and students talked about that dedication. Those who knew him best said he had a strong and encouraging nature. “He had his way of motivating kids and getting the best out of them,” said Ted Luckado, who served as Westside High’s head football coach from 1984 until 2012. “He would open the gym for them anytime they wanted. He was a relentless worker, at spending time, helping kids get better.”

One of those athletes, Marie Buck, was stunned by the news of Roberts’ death. She graduated from Westside High in 2000, and is now a teacher at a university in Detroit. She was on the girls’ track team from her seventh-grade year until her senior year at Westside High. “He played an important role in my life when I was young,” Buck said. “I was shy and did not deal with pressure really well. He always acknowledged if I had won a meet. Even if it was really hectic, he would comment on how you did.”

In his off-time, Roberts was an avid reader, loved history and was as devoted to his wife and family as he was his students and sports. Terence said his mother and father were married for 50-plus years. Linda Roberts was an English teacher at Westside High for 30 years. Their son Kory is carrying on the tradition of teaching. Kory is currently principal at Centerville Elementary and he will take on the role of leading Westside High School in the 2014-15 school year when Henry Adair retires.

The quiet, firm and encouraging nature William Roberts had at work carried over at home. Terence Roberts said he was always focused on the basics of the game, and believed that success came with hard work and lots of practice. That look that he would give his students, he would also give to his sons. “He was a very quiet man in both of those things — as a coach and a father. He did not talk to hear himself talk,” Terence said. “When he spoke, he had our attention. It meant something.”

William Roberts coached at Westside High from 1951 until 1998. In 1998, he was inducted into the South Carolina Athletic Coaches Association Hall of Fame and in 1999, the Anderson School District 5 board voted unanimously to name the high school’s gym after him.

William Roberts coached at Westside High from 1951 until 1998. In 1998, he was inducted into the South Carolina Athletic Coaches Association Hall of Fame and in 1999, the Anderson School District 5 board voted unanimously to name the high school’s gym after him.

He spent his entire career at Westside:

Johnson Funeral Home in Anderson is handling the funeral.