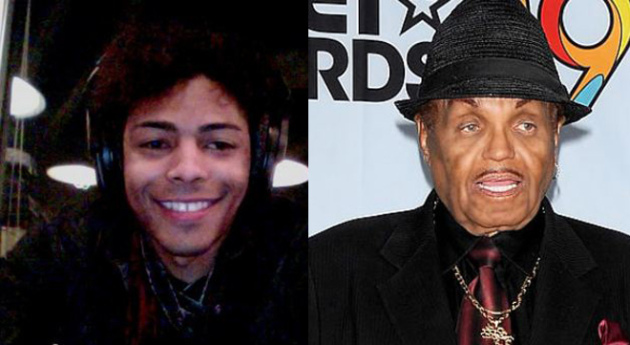 Organizers of a DNA test claimed on Thursday to have proven that Michael Jackson is the biological father of Howard, a claim that TMZ has called into question because details surrounding the testing were suspect.

In today’s development, the New York Daily News is citing an unnamed source who claims that Jackson patriarch Joe Jackson is actually the father of Brandon Howard…and Michael is his half-brother.

“I’ve been hearing for years that Brandon is Joe’s son,” the source said.

Confusing the issue more is that singer Augie Johnson has declared that he is Howard’s real father, the International Business Times reported. Augie, 65, was a backup singer on Michael Jackson’s 1979 album, “Off The Wall.”

His mother, 53-year-old pop singer Miki Howard, was reportedly repped by Jackson family patriarch Joe Jackson in the 1980s. She also appeared in the 1993 movie “Poetic Justice” with Janet Jackson.

As previously reported, the genetic mystery reached a bizarre peak at a press conference in Beverly Hills on Thursday that was organized by shipping heir Alki David and streamed live on his FilmOn.com website. Brandon Howard wasn’t present for the hyped announcement but confirmed in a Facebook post that he gave a DNA sample for the test.

Dr. Joseph Goodman, a Beverly Hills dental surgeon, revealed the results, and claimed he obtained a sample of Michael Jackson’s DNA from a dental device that had belonged to the “Thriller” singer. He purchased the device at auction.

Goodman pulled a piece of paper from an envelope and said the test showed the “probability” of the King of Pop being a parental match was “99.9 percent.” “I think we have the proof,” Goodman declared.

Despite Goodman’s claim, the paperwork did not include the names of the test subjects or the name of a testing lab, but David told viewers such tests are typically done anonymously and that other information was redacted as a security safeguard.

Jackson estate lawyer Howard Weitzman didn’t see things that way, however. “It sounds like a fraud to me,” Weitzman told the Daily News later Thursday.

Former child actor Corey Feldman, who was pals with Michael Jackson during his moonwalking heyday, attended David’s press conference and told The News he believes The Gloved One is the father.

“Personally, I do, because I’ve never met two people who were more alike in my life,” Feldman, 42, said.