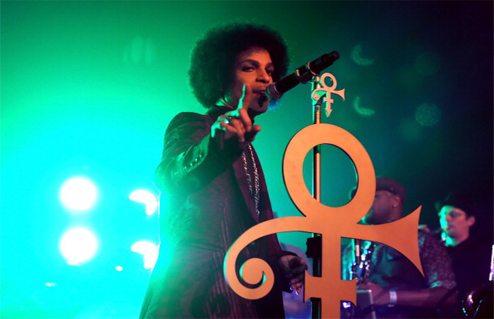 Even though they hadn’t been a couple since the 80’s, the death of Denise ‘Vanity’ Matthews must have hit Prince pretty hard.Currently on tour in Australia, Prince dedicated his Melbourne show to Matthews, who had been battling illness for some time. The Herald Sun in Australia reports that Prince’s intimate show was reworked to pay homage to Matthews, who died yesterday at 57 after a long illness.

His first Melbourne show at the State Theatre was particularly emotionally charged — Prince admitting he’d just found out about the death of Denise Matthews, aka Vanity, his ex-girlfriend from the early ‘80s and protoge when she fronted the band Vanity 6.

“Someone dear to us has passed away, I’m gonna dedicate this song to her,” Prince said before playing a touching version of “Little Red Corvette” with a touch of “Dirty Mind” — songs from the era when they were together.

Prince reworked his classic “The Ladder” to replace the name ‘Electra’ with ‘Vanity’ — so the lyrics ran “This Prince, he had a subject named Vanity who loved him with a passion, uncontested.”

After an encore Prince returned to the stage noting “I am new to this playing alone. I thank you all for being so patient. I’m trying to stay focused, it’s a little heavy for me tonight. Just keep jamming … She knows about this one.” That introduced a truly incredible version of “The Beautiful Ones,” another song from the Vanity era (she was the original choice for lead in the Purple Rain movie), the song ending with Prince changing “my knees” for “Denise … Denise.”

Unusually chatty and candid, he continued going off script. “Can I tell you a story about Vanity? Or should I tell you a story about Denise? Her and I used to love each other deeply. She loved me for the artist I was, I loved her for the artist she was trying to be. She and I would fight. She was very headstrong cos she knew she was the finest woman in the world. She never missed an opportunity to tell you that.”

Prince then opened up about a fight where he threatened to throw Vanity in the pool. She said “You can’t throw me in the pool, you’re too little”. He then asked his six foot bodyguard Chick to do the dirty work for him.

“I probably shouldn’t be telling this story,“ he said, “but she’d want us to celebrate her life and not mourn her.”