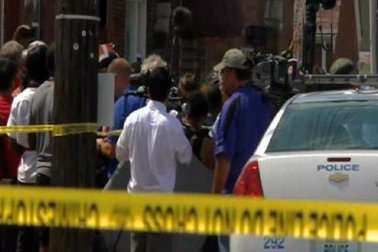 Police were investigating an officer-involved shooting Tuesday in St. Louis, just miles from where Michael Brown was killed in Ferguson, Missouri.

The shooting took place not far from Ferguson, Missouri, where the death of black teenager Brown by a white police officer has touched off violent protests.

“The suspect, who right now is described as a 23-year-old African-American, was acting erratically — walking back and forth up and down the street,” St. Louis Police Chief Sam Dotson told reporters.

“As officers arrived, the suspect turned towards the officers and started to walk towards them clutching his waistband. He then pulled out a knife … and told the officers, ‘Shoot me now. Kill me now,'” the chief said.

Responding officers told the man, repeatedly, to stop and drop his knife, Dotson said. He continued to approach, coming within about four feet of one of the officers, Dotson said, adding that both officers then fired their weapons, striking the suspect.

According to the St. Louis police chief, the suspect was involved in an incident earlier in the day at a convenience store, where he is accused of walking out with two energy drinks and a package of pastries without paying.

Asked about whether he was concerned Tuesday’s shooting could inflame passions further in nearby Ferguson, Dotson talked about the importance of officer safety.

“If you’re the family of a police officer and somebody approaches you within three feet with a knife, I think you have the right to defend yourself and protect yourself. So I think it certainly is reasonable that an officer has an expectation to go home at the end of the night,” he said.

No officers were injured, he said.