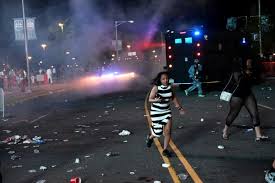 EAST RUTHERFORD, N.J. (AP) — New Jersey State Police blocking gates outside of a major hip-hop concert Sunday night at MetLife Stadium had bottles thrown at them by angry people in the crowd who were trying to get inside — some without tickets — and they later used tear gas to try to disperse them, according to officials.

Crowds at the Hot 97 Summer Jam concert became upset when the gates were closed and blocked off by police in riot gear. An armored state police vehicle began blasting a piercing loud noise to try to disperse the crowd and police later deployed tear gas.

Additional troops were sent for “crowd control” and arrests have been made, a police spokesman, Sgt. Gregory Williams, told The Associated Press. State police didn’t release details about what measures they used to disperse the crowd.

The disturbance began when crowds of people tried to “illegally” force their way into the sold out event by climbing over fences and forcing their way through security, state police said in a statement Sunday night. Police said they insisted that everyone outside of the gate leave the stadium complex to avoid congestion when the concert ended.

Videos and photos posted by people outside of the stadium on social media showed fights between concert goers and police in riot gear blocking the entrance. Images also showed police using large military-style vehicles to try to disperse the crowds.

Janae Griffin, who drove up from Baltimore for the concert but wasn’t able to get inside, said the parking lots outside were chaotic.

“People were throwing bottles across the crowd,” she said. “We got into a confrontation with a guy who was deliberately trying to vandalize a police car and was just making it worse of a situation than it needed to be.”

The major concert is hosted annually by a New York radio station and was headlined Sunday by Kendrick Lamar, Trey Songz, Big Sean and Chris Brown.

Emmis New York, which owns Hot 97, said in a statement that refunds will be offered for ticket holders whose tickets were not scanned. They said the concert sold out Sunday evening and that “a small number of people created an unsafe environment, and for the safety of all guests, the New Jersey State Police were on scene to disperse the crowd.” The gates to get inside were then closed and no one else was allowed in.

It wasn’t immediately clear if there were any injuries.