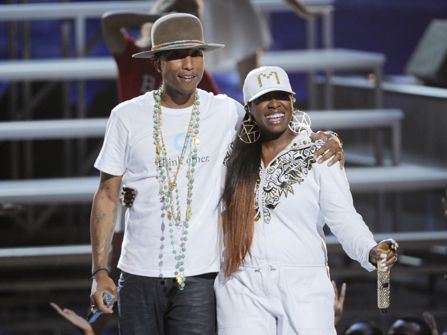 Pharrell’s “Happy” is keeping a smile on the musician’s face: The song won Video of the Year Sunday at the BET Awards, which aired live from the Nokia Theater in Los Angeles.

Last year, the network didn’t announce the top award in the jam-packed show.

Pharrell thanked his family, fans who elevated the song to No. 1 and BET for its support.

“(BET) allows us as black people to be different and do what we do,” he told the crowd. “You guys keep the lights on for us.”

Nicki Minaj told the crowd at the BET Awards that she was close to death recently — an experience that has helped her be herself.

The rapper rambled onstage when accepting her fifth consecutive win for best female hip-hop artist, where she thanked Lil Wayne for his support, talked about writing her own lyrics and about getting the credit she deserves in the industry.

“The other day, literally I didn’t tell anybody this, I really thought I was about to die. Like, I was saying my prayers to die. And I didn’t even want to call the ambulance because I thought, ‘Well if I call the ambulance, it’s going to be on TMZ,’” she said, as some of the audience laughed.

“And I would rather sit there and die,” she added, looking to the crowd. “And it made me realize I don’t care what anybody got to say. I’m going to do me.”

The multitalented Pharrell, who also won best male R&B/pop artist, kicked off the show with a playful performance of “Come Get It Bae” featuring the reclusive Missy Elliott. Host Chris Rock also succeeded with back-to-back jokes, helping take attention away from a fatal shooting and a separate stabbing at unsanctioned parties celebrating the ceremony.

Rock didn’t mention the violence. He won over the audience with jokes about Donald Sterling, the hit series Scandal and rapper Rick Ross. He called the BET Awards the “Black World Cup.”

The show featured a medley of hits from Usher, and Iggy Azalea performed her anthemic “Fancy,” which is spending its fifth week on top of the Billboard charts. Chris Brown, who was recently released from jail, gave an energetic performance. He sang and danced his signature moves to his latest Top 10 hit, “Loyal” along with Li’l Wayne and Tyga.

John Legend sang “You and I,” joined by rising newcomer Jhene Aiko, who won over the crowd by singing her hit, “The Worst” as Legend played piano.

As the show kicked off, a tearful August Alsina, nominated for four honors, won the night’s first award for Best New Artist.

“I represent the struggle,” the New Orleans newcomer said onstage. “This award is not for me, it’s for the people.”

Robin Thicke, who sang and played piano, dedicated his performance of “Forever Love” to his wife Paula Patton, whom he is separated from. He said “I miss you and I’m sorry” and the performance ended up with a photo of former couple. Drake won best Male Hip-Hop Artist but did not attend the show.

Lionel Richie, the Lifetime Achievement award recipient, was serenaded by Legend, Ledisi and Yolanda Adams, who sang a rousing rendition of “Jesus Is Love.” She earned a standing ovation.

“I’m glad I sang the song first. Otherwise, I would not be here onstage,” Richie said, holding his award. He performed “Easy Like Sunday Morning” and “All Night Long (All Night).”

A tribute to 90s R&B was met with praise, too: Groups like Silk, Color Me Badd and Troop performed well-known jams that enticed the crowd.

The late icons Maya Angelou and Ruby Dee were remembered in words by Phylicia Rashad, who earned a stirring applause when she walked onstage.

Lupita Nyong’o, who won an Oscar for “12 Years a Slave,” was named Best Actress.