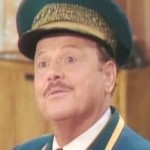 Ned Wertimer, one of TV’s most recognizable character actors who was best known as the greedy doorman Ralph on “The Jeffersons,” died Jan. 2 at the Sherman Valley Health Care Center in California.

He was 89 and his manager Brad Lemack said he had been suffering from health complications.

His last role was in 2007’s “Pirates of the Caribbean: At World’s End,” where he played a pirate extra.

But he was best known for roles in dozens of TV’s most memorable sitcoms.