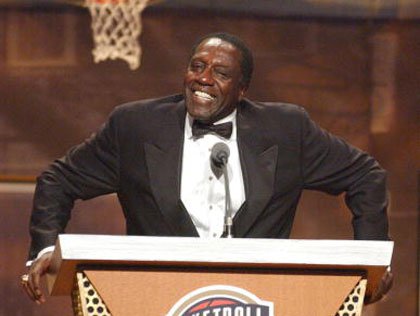 The virtuosic basketball star Meadowlark Lemon, renowned as the “Clown Prince of basketball” during his tenure with fellow court pranksters, the Harlem Globetrotters, has died. He was 83.

His death Sunday at his home in Scottsdale, Ariz., announced by the Globetrotters, was confirmed by his wife, Dr. Cynthia Lemon.

Both expert player and entertainer, Lemon was the ringmaster of the team that delighted the world with their court antics. He toured with the Globetrotters, playing more than 16,000 games, including 7,500 consecutively, while performing for heads of states, popes and schoolchildren.

He was one of the most popular athletes in the world during the prime of his career, thanks to a unique blend of athleticism and showmanship.

All marveled at Lemon’s jaw-dropping half-court hook shots and infectious humor — taunting referees and competing players while making the ball sing on his fingertips.

“My destiny was to make people happy,” Lemon said in 2003 during his induction ceremony to the Naismith Memorial Basketball Hall of Fame.

“For a generation of fans, the name Meadowlark Lemon was synonymous with the Harlem Globetrotters,” Globetrotters CEO Kurt Schneider said. “He was an incredible entertainer and brought happiness and lifelong memories to millions around the world. We have lost a great ambassador of the game.”

After attending Florida A&M University, Lemon played during one of the Globetrotters’ overseas tours while serving in the Army, and requested a tryout with the team. He joined the organization in 1954 and played with the team for about a quarter of a century, and briefly returned in 1994.

After leaving the Globetrotters in 1980, Lemon played with the Bucketeers, the Shooting Stars and Meadowlark Lemon’s Harlem All Stars.

In 2000 Lemon was honored with the Naismith Memorial Basketball Hall of Fame’s John Bunn Award for lifetime contributions to the sport, and three years later was a Hall of Fame inductee. A sign of his crossover appeal, Lemon was also inducted into the International Clown Hall of Fame.

Lemon also made several film and TV appearances (usually as himself), including the basketball comedy “The Fish That Saved Pittsburgh,” and the TV sitcoms “Diff’rent Strokes” and “Hello, Larry,” as well as a Saturday morning cartoon.

In 2010 Lemon — an ordained minister — published “Trust Your Next Shot: A Guide to a Life of Joy,” a memoir of his days with the Globetrotters and a guide to living a joy-filled life. He told CBS Station WCBS that one secret to winning over people is to make them laugh; once two people have that connection, Lemon said, that’s the beginning of a team.

Through his ministry, Lemon spent his later years as a motivational speaker, meeting children around the country at basketball camps and youth prisons.

He never lost touch with his beloved sport. Lemon said he rose every day at 4 a.m. and, after prayers, headed for the gym to run sprints and practice shooting.

“I have to keep that hook shot working,” he said.