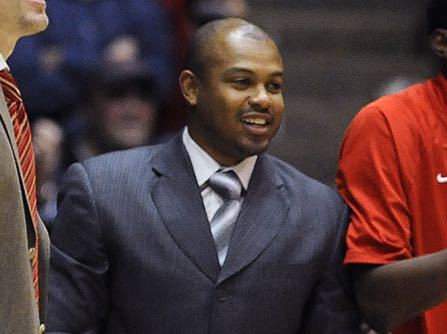 BLOOMINGTON, Ill. (AP) — A private plane returning from the NCAA basketball tournament in Indianapolis crashed in a central Illinois field on Tuesday, killing all seven people on board, including Illinois State University’s associate head basketball coach and a deputy athletics director.

Rescue personnel found no survivors at the site near the city of Bloomington, and a coroner pronounced the seven occupants dead, McLean County Sheriff Jon Sandage said at a news conference. The plane went down in a soybean field 2 1/2 miles from the Bloomington airport. All the victims, who were found strapped in their seats, died from blunt force trauma resulting from the crash, said Coroner Kathleen Davis.

The journey to Monday night’s championship game began with a phone call. Scott Bittner, a 42-year-old business owner, got a call from sports bar owner Terry Stralow, 64, asking if he wanted to go to the game.

“He said he had an extra ticket and asked him to go,” said Terry Wertz, who worked alongside Bittner at a meat processing plant. Wertz said that when Bittner hung up the phone he was “really excited.”

They took off for the game in a plane that Bittner used regularly for business trips, owned by his father. It was not clear exactly how they were connected with the others on board, but local broadcasters talked about the group as if many of them were well acquainted with one another.

Bittner and Stralow were two of the seven killed.

But Illinois State University President Larry Dietz confirmed in an email to students, faculty and staff that associate head basketball coach Torrey Ward, 36, (pictured) and Aaron Leetch, 37, the athletic department’s deputy director for external relations, were also killed in the early-morning crash. The email was released to media.

“Words cannot fully express the grief that is felt in the wake of such a tragedy,” Dietz wrote, adding that both men were well-respected and much-loved in the athletics department. “We move between shock and profound sadness.”

Ward’s last tweet reflected the celebratory spirit the group was enjoying on the way to the game.

The Cessna 414 twin-engine aircraft took off from Indianapolis and crashed just short of the Central Illinois Regional Airport in Bloomington after midnight, the Federal Aviation Administration said.

The National Transportation Safety Board was investigating, but there was no initial word on the cause of the crash. News photos from near the scene showed dense fog.

The airport was open and all systems, including its runway lighting, were functioning, though the tower had closed several hours earlier and handed responsibility to an air traffic control facility in Peoria.

Radar contact was lost moments before the crash and a search was launched when the pilot failed to close out his flight plan. It took about three hours to find the wreckage.

Officials said they would release more details by late afternoon.

“He loved his children and his family more than anything in the world, wonderful man. That’s really all I can say right now,” she said.

The McLean County coroner’s office later identified the other victims as Stralow, pilot Thomas Hileman, 51, and Andrew Butler, 40, an employee of Sprint.

Bittner’s father-in-law, Scott Barrows, told the Chicago Tribune that Hileman was a regular and experienced pilot of the 10-seater aircraft.

Bittner lived with his wife and two children in Towanda, a small village just outside Bloomington, his co-worker Wertz told The Associated Press. He owned a meat processing plant in Eureka, Illinois, carrying on the family’s line of work after his dad established another plant in the small city of Chenoa, where Bittner grew up.

“He always told me that he wasn’t my boss, that I didn’t work for him, I worked with him,” said Wertz, who has worked at Bittner’s Meat Co. for 15 years.

“If I needed anything, he’d do anything for you,” Wertz said through tears.

The plant butchers livestock, including beef, pork, lambs and goats.

The aircraft was registered to Make it Happen Aviation LLC of Towanda, Illinois.