Huckabee Vs. Jay-Z: Another Attack From The GOP
POSTED BY WLAS January 14th, 2015 0 COMMENTS 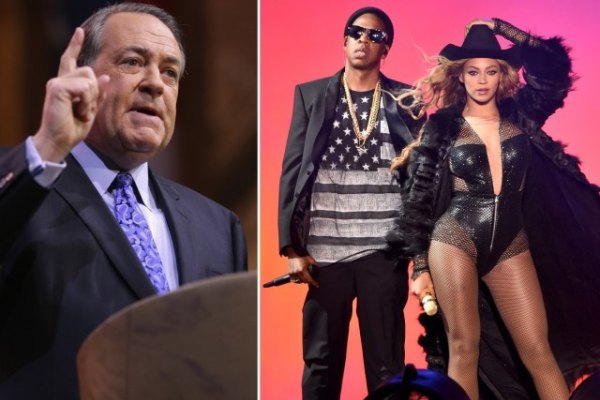 Republicans aren’t as seriously concerned about courting African Americans as they claimed to be during last year’s mid-term elections. We know it — and they know it. In yet another racially-charged and stereotypical statement directed at black people by a high-profile Republican leader, Mike Huckabee, the former Arkansas governor and a possible 2016 presidential candidate, took aim at Jay Z and Beyonce.

Huckabee actually called Jay Z a “pimp” in his forthcoming book about today’s “fractious” American society, God, Guns, Grits, and Gravy, to be released Jan. 20. In one section of his book, Huckabee focused on Jay Z and Beyonce’s 2014 Grammys performance, “Drunk in Love,” which Huckabee called “foreplay.”

“My reaction: Why? Beyonce is incredibly talented –- gifted, in fact. She has an exceptional set of pipes and can actually sing. She is a terrific dancer –- without the explicit moves best left for the privacy of her bedroom. Jay Z is a very shrewd businessman, but I wonder: Does it occur to him that he is arguably crossing the line from husband to pimp by exploiting his wife as a sex object?” Huckabee wrote.

Why did Huckabee need to use “pimp” to describe Jay Z’s relationship with Beyonce? I would argue that Beyonce has offered more risqué performances as a solo artist where Jay Z was nowhere to be found. Also, “Drunk in Love” is a song from Beyonce’s album, not Jay Z’s. But more importantly, here’s a potential candidate for President of the United States calling a popular – and married – black rapper a “pimp.”

What an offensive stereotype to perpetuate, particularly and at a time when the GOP claims to have an ongoing outreach campaign to attract black voters.

Jay Z, rapper, entrepreneur, record producer, is worth an estimated $520 million, according to Forbes, and Huckabee called this successful black man a “pimp” because Huckabee can only see Jay Z in the context of a street hustler. The good news is that Huckabee has zero chance of actually becoming President so we don’t have to worry about him hurling racial insults at black men from the Oval Office.

A recent CNN/ORC poll showed Huckabee tied for fourth place with Sen. Rand Paul, R-Kentucky, with 6% support in a hypothetical GOP horse race. Bush topped the list at 23%, followed by New Jersey Gov. Chris Christie at 13% and neurosurgeon Ben Carson at 7%. Black Americans should be reminded of the Republican leaders who side with bigots — or who don’t denounce them.

Take Texas Gov. Rick Perry, the ultra-conservative Republican and potential presidential candidate who last year refused to condemn Cliven Bundy, the radical Nevada rancher who questioned whether the “Negro” was better off in slavery.

“I want to tell you one more thing I know about the Negro,” Bundy said. “Because they were basically on government subsidy, so now what do they do? They abort their young children, they put their young men in jail, because they never learned how to pick cotton. And I’ve often wondered, are they better off as slaves, picking cotton and having a family life and doing things, or are they better off under government subsidy? They didn’t get no more freedom. They got less freedom. Are they slaves to charities and government subsidized homes?” Bundy asked.

I get that Republicans can’t police every ill-advised thought uttered by ignorant GOP leaders and conservatives, but there’s a collective mentality of racial bias that permeates the GOP. They just can’t help themselves when it comes to making offensive statements directed toward African Americans.

What do you think?