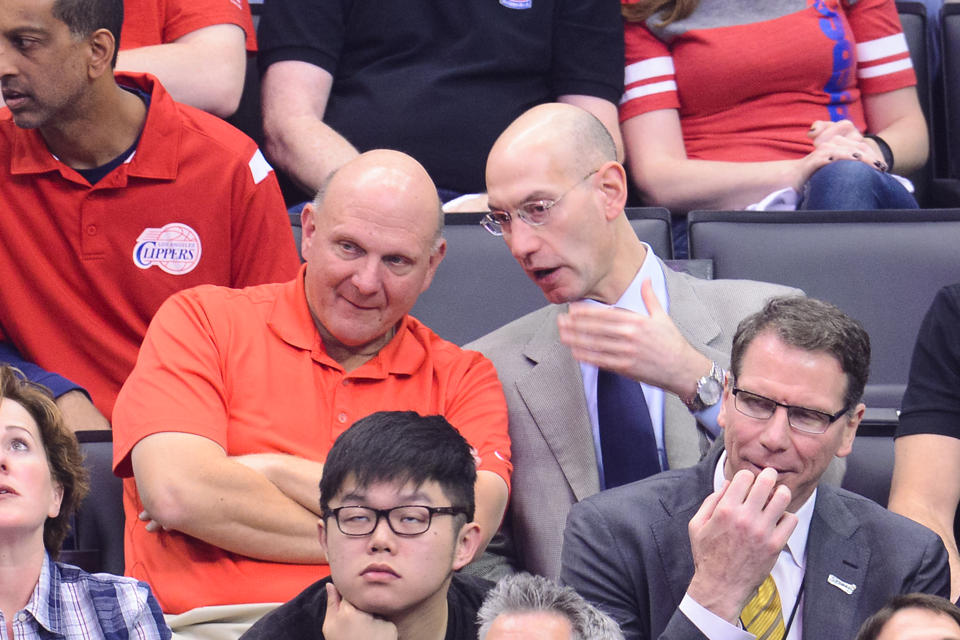 Former Microsoft CEO Steve Ballmer has won bidding to purchase the Los Angeles Clippers from owners Donald and Shelly Sterling with an NBA-record offer of $2 billion, according to James Rainey of the Los Angeles Times:

Ballmer bid higher than competitors that included Los Angeles-based investors Tony Ressler and Bruce Karsh and a group that included David Geffen and executives from the Guggenheim Group, the Chicago-based owner of the Los Angeles Dodgers.

The Geffen group offered $1.6 billion and the Ressler-Karsh group $1.2 billion. People familiar with both those offers said they were rejected.

The sale price would be almost four times the highest previous NBA franchise sale price — the $550 million paid earlier this month for the Milwaukee Bucks. It is second only to the Dodgers 2012 sale for $2.1 billion as the highest price for any sports team in North America.

The Associated Press and ESPN reported Thursday night that Ballmer and the Sterling Family Trust have a binding agreement that will go to the NBA. One big potential roadblock to completing the purchase: Donald Sterling’s attorneys said Thursday evening he has yet to approve a sale.

Movement toward the sale of the Clippers began gaining momentum last Friday, when news broke that Donald Sterling — who has been banned for life from the NBA and fined $2.5 million by NBA Commissioner Adam Silver following the publication of audio recordings in which he made racist remarks — had agreed to allow his wife, Rochelle “Shelly” Sterling, to oversee a sale. Shelly Sterling has tried to negotiate a rushed sale ahead of a scheduled Tuesday hearing in which the NBA’s other 29 owners will vote whether to terminate the Sterlings’ ownership of the franchise.

Sterling has gone back and forth in recent days over whether he’d actually assent to any negotiated deal and appears to be continuing his hemming and hawing.

If the negotiated deal actually gets past Donald Sterling, it would also reportedly need to be co-signed by the owners of the NBA’s 29 other franchises. Rainey of the Times reports that the agreement would be “expected to clear that hurdle as long as Ballmer reaffirms his pledge to keep the team in Los Angeles and not move it to Seattle, where he lives.”

This is not Ballmer’s first foray into attempting to purchase an NBA franchise. The former Microsoft CEO partnered with hedge fund manager Chris Hansen last year in an attempt to buy the Sacramento Kings for $525 million (an offer later increased to $575 million and even to $625 million) and relocate them to Washington, bringing them back in the garb of the dearly departed Seattle SuperSonics. That didn’t happen, as the NBA’s relocation committee recommended the team stay in Sacramento, the league’s Board of Governors voted to keep them there, and a local ownership group led by Vivek Ranadivé eventually purchased the team from the Maloofs for a then-league-record $534 million.

While Ballmer was considered something of a volatile element in that process, he remained a very wealthy person whom the NBA had already vetted in the run-up to the Sacramento sale, making him a person of interest in the Clippers’ proceedings. He was spotted sitting and chatting with NBA commissioner Adam Silver during the Clippers’ win over the Oklahoma City Thunder in Game 4 of the the second round of the playoffs, stoking rumors of his interest. He spoke about his desire to buy into the NBA in a recent conversation with the Wall Street Journal.

WSJ: You’ve tried a couple times to buy an NBA franchise to return a basketball team to Seattle. Are you interested in the Los Angeles Clippers, if the team goes up for sale?

Ballmer: I have nothing definitive to say. Am I right on top of what’s going on there? Absolutely I am. I love basketball, and I’d love to participate at some point in the NBA. If the opportunity is outside of Seattle, so be it. I will learn about any team that comes up for sale at this point.

WSJ: So you wouldn’t move the Clippers to Seattle?

Ballmer: If I get interested in the Clippers, it would be for Los Angeles. I don’t work anymore, so I have more geographic flexibility than I did a year, year-and-a half ago. Moving them anywhere else would be value destructive.