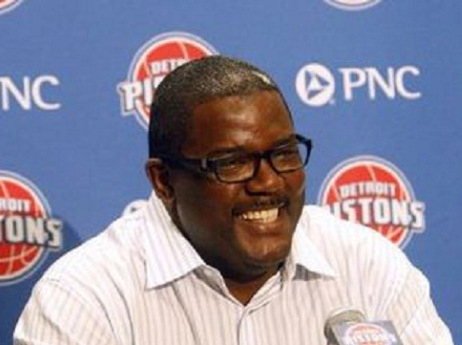 The team made the move official Monday, a day after the Pistons lost their home finale and dropped to 29-52 with one game remaining in the season. Detroit will miss the postseason for a fifth consecutive year.

“It’s time to turn the page on a wonderful chapter and begin writing a new one,” Dumars said in a statement. “I’ve had the pleasure of working with some great people throughout the last 29 years as both a player and executive, and I’m proud of our accomplishments. Tom Gores and ownership is committed to winning and they will continue to move the franchise forward.”

Gores took over as owner in 2011, with the team clearly in a rebuilding mode, but expectations were higher this season after the Pistons signed Josh Smith and traded for Brandon Jennings. The new-look roster flopped, and now somebody else will be in charge of the next effort to bring Detroit back to the postseason.

“Joe Dumars is a great champion who has meant so much to this franchise and this community,” Gores said. “We are turning the page with great respect for what he has accomplished not only as a player and a front office executive, but as a person who has represented this team and the NBA with extraordinary dignity.”

Dumars will remain an adviser to the ownership team, but this is the end of an era. Drafted by the Pistons in 1985, Dumars spent his entire 14-year playing career with the franchise, winning NBA titles in 1989 and 1990.

He was Detroit’s vice president of player personnel during the 1999-2000 season before being promoted to president of basketball operations. Dumars was named the 2003 executive of the year, and the Pistons won another title the following season.

For the first half of his tenure as team president, Dumars’ Pistons were a model of consistency, even as players and coaches came and went. Detroit reached the Eastern Conference finals every year from 2003-08, but after the team slid back into mediocrity, some of Dumars’ most aggressive moves backfired.

In 2008, Dumars traded Chauncey Billups in a deal that brought Allen Iverson to the Pistons. That didn’t work out well, and neither did the decision to sign Ben Gordon and Charlie Villanueva to big contracts during the 2009 off season.