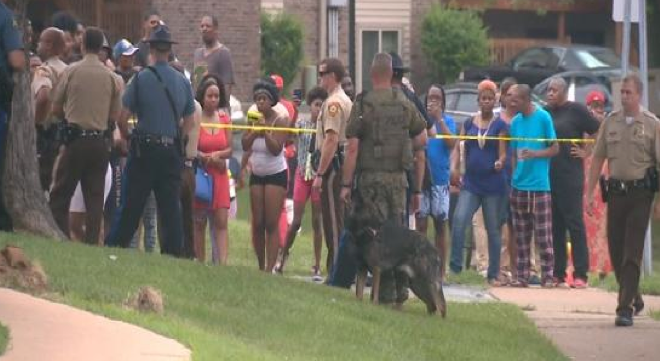 An unarmed black teenager who was supposed to start college on Monday won’t make it there. Instead, his family is planning his funeral after he was shot by police in Ferguson, MO, a suburb of St. Louis.

The St. Louis County Police Department held a press conference Sunday morning where they said Mike Brown, 18, was shot “more than just a couple of times” by a 6-year member of the Ferguson Police department, reports KMOV/News 4.

News 4 says witnesses told the station that Brown was unarmed and had his hands in the air when he was shot multiple times by a Ferguson police officer on Saturday afternoon. Police have not confirmed those claims and have not released any details of the incident other than an officer was involved and has been placed on administrative leave.

Ferguson authorities haven’t revealed what prompted the incident, but have confirmed that it was their officer who fired at Brown. Hundreds of local residents reportedly swarmed the scene, some chanting obscenities at the police.

The presence of that many people led to an increased police presence, according to News 4:

“There are at least 100 police cars and numerous officers armed with M-16′s in the area. Stark also says hundreds of people have gathered at the intersection of West Florissant Avenue and Canfield Drive to protest the incident. A large police force from 15 different departments responded, including riot-control officers.”

The crowd eventually dissipated around 5 p.m. local time, but the anger is still high on social media, according to Raw Story.