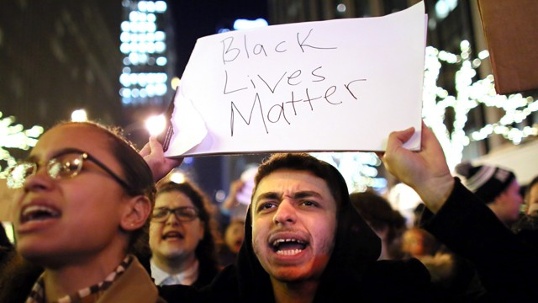 (CNN) —Protesters are flooding the streets of New York and elsewhere — chanting, blocking traffic and demanding change after the decision not to indict in the chokehold death of Eric Garner.

Demonstrators staged a “die-in” in Brooklyn, New York, late Thursday. They lay in the middle of Atlantic Avenue. An eerie silence descended as the protesters, who had cardboard coffins, stopped chanting.

The march was being led by three mothers, all of whom had lost a son to police. Protesters stopped other marchers from getting ahead of the women. They wanted them to walk in front.

“I’m so happy that people of all cultures, all ethnicities, came out to show their love and support, and basically we have to make a change because they’re killing us off,” a protester told CNN.

A part of the Brooklyn Bridge was closed. Protesters marched up Broadway, and police used pepper spray on the West Side Highway near Houston Street. The vast majority of the demonstrations were peaceful.

“What do we want? Justice! When do we want it? Now!” protesters shouted in New York’s Foley Square.

Garner, a black man, died in July after a white officer put him in a chokehold on Staten Island.

The case cracked open a wider discussion around policing practices in communities of color.

“I’m out here because the system has failed us too many times,” Courtney Wicker, a protester, told CNN affiliate NY1. “It makes me feel like there’s no justice.”

Demonstrations also erupted in Boston, Washington, D.C. and Chicago, where they shut down one of the major roads downtown.

Robert Spriggs, 22, a young protester in Washington, told CNN: It feels like we’re moving backwards, so if we have to march like it’s the ’60s, we will.

Earlier in Pittsburgh, protesters marched and lay down in the middle of a street.

“Police are racially profiling people. They are harassing people,” she said. “There is just no accountability and no justice for the victims.”

The demonstrations raise the question: If the way we police in America is wrong, as many suggest, then what’s right?

That’s the problem police and communities now face in the wake of three high-profile investigations that, collectively, have sparked a national conversation around changing the status quo.

In Ferguson, Missouri, violence and chaos erupted after a different grand jury elected not to indict a white officer for killing a black teenager.

A nearly two-year investigation by the Justice Department revealed a pattern of excessive force by police in Cleveland.

And in New York, officials are still in the midst of grappling with what to do in the wake of Garner’s death.

His encounter with Officer Daniel Pantaleo was captured on video.

Another video shows the dying man lying on the street for more than six minutes as officers calmly wait for an ambulance, showing no sign of urgency.

The mayor said: “This tragedy is raising a lot of tough questions. There’s tremendous resolve here in this city to answer those questions, to get it right.”

Pantaleo offered his condolences to Garner’s family in a statement.

“I became a police officer to help people and to protect those who can’t protect themselves,” he said. “It is never my intention to harm anyone and I feel very bad about the death of Mr. Garner.”

In addition to the internal investigation, Pantaleo has been the subject of two other lawsuits. In both, the plaintiffs allege false arrest, unlawful imprisonment, civil rights violations and other charges. One suit from 2013 was dismissed in January 2014, while the second, from February 2014, remains open.

Speaking specifically about the Garner case, Bratton said he understood people’s anger over the scenes on the video, but that he also trusted the legal process and the grand jury’s judgment in spite of the images.

“As much as we think video is the final determinant, it is not,” he said. The grand jury saw much more evidence and argument than the public or he have seen, he said.

A judge ruled Thursday against releasing some of the testimony and evidence presented to jurors, one day after the Staten Island district attorney filed a motion asking for such a release, given the public interest in the case.

Certain facts about the jury, however, were released. It sat for nine weeks and heard from a 50 witnesses, including civilians, officers and medical personnel. Sixty exhibits were admitted into evidence, including four videos.

Pantaleo’s police union defended his tackle, with Patrolmen’s Benevolent Association President Patrick Lynch saying “it is clear that the officer’s intention was to do nothing more than take Mr. Garner into custody as instructed and that he used the takedown technique that he learned in the academy when Mr. Garner refused.”