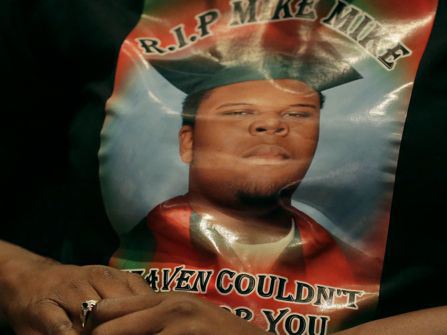 NEW YORK (AP) — An unarmed black teenager killed by a white officer in Missouri was shot at least six times, including twice in the head, a preliminary private autopsy has found.

The New York Times reported that the autopsy by Dr. Michael Baden, a former New York City chief medical examiner, found that one of the bullets entered the top of Michael Brown’s skull, suggesting that his head was bent forward when he suffered a fatal injury.

Baden said it was likely the last of bullets to hit Brown, 18, whose death has spurred a week of rancorous protests in Ferguson, in suburban St. Louis.

Police have said little about the encounter between Brown and the officer, except to say that it involved a scuffle in which the officer was injured and Brown was shot. Witnesses say the teenager had his hands in the air as the officer fired multiple rounds.

Baden told the Times that Brown was also shot four times in the right arm and that all the bullets were fired into his front. The newspaper said the bullets did not appear to have come from very close range because there was no gunpowder on his body.

That determination could change if there were residue on Brown’s clothing, which Baden did not examine, the newspaper said.

Some of the bullets entered and exited Brown several times, the newspaper said, including one that caused at least five wounds. It said one shattered his right eye, went through his face, left through his jaw and re-entered his collarbone. The last two shots in the head would have stopped him in his tracks and were likely the last fired, the Times said.

Baden told the newspaper Brown would not have survived even if he had been taken to a hospital immediately.

Baden did not return a message left by The Associated Press earlier Sunday.

Earlier Sunday, Attorney General Eric Holder ordered a federal medical examiner to perform another autopsy on Brown, citing the “extraordinary circumstances” surrounding his death and a request by Brown’s family.