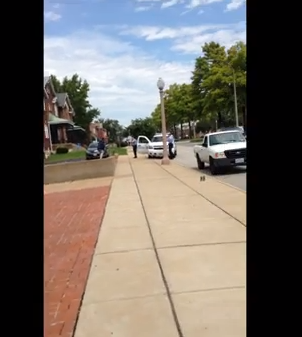 According to St. Louis Public Radio, the police released the video Wednesday evening as part of an effort to be more transparent when it comes to violent incidents involving law enforcement. In addition to the cell phone footage, the department also released security camera footage of the alleged robbery, as well as the two 911 calls made to police.

Police were first called to the scene – less than four miles away from the spot Michael Brown, an unarmed 18-year-old, was killed – when a local store owner reported the 25-year-old Powell stole drinks and donuts from his shop, according to a recording of the 911 call. Another woman called to report Powell was acting erratically and had a knife in his pocket.

Two officers in a police SUV responded to the calls, the cell phone video shows. When the officers got out of their vehicle, Powell walked in their direction, yelling and telling them to shoot him already.

St. Louis Police Chief Sam Dotson said Tuesday that both of the officers opened fire on Powell when he came within a three or four feet of them holding a knife “in an overhand grip.”

But the newly released cell phone footage undermines the statement, showing Powell approaching the cops, but not coming as close as was reported, with his hands at his side. The officers began shooting within 15 seconds of their arrival, hitting Powell with a barrage of bullets.