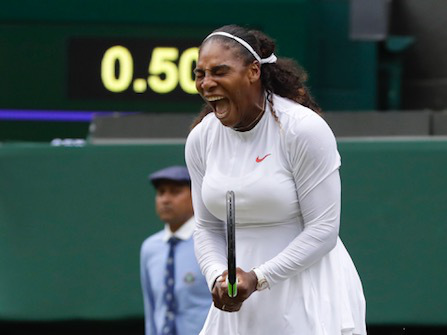 Serena Williams continued her Wimbledon return by moving into the third round with an emphatic 6-1, 6-4 win over Viktoriya Tomova. The seven-time champion lost just five of 32 points on her first serve as she took a little over an hour to triumph against her 135th-ranked opponent.

Williams was unable to defend her 2016 Wimbledon title last year because she was pregnant.

Despite her ranking having fallen to 181, Williams is seeded 25th this year. The 36-year-old American next faces German Tatjana Maria or Kristina Mladenovic of France. Her sister, five-time Wimbledon champion Venus Williams once again dropped the opening set, and once again dominated the rest of the way to win.

Williams got broken in the first game and did not recover in the opening set, in which she made 12 unforced errors, twice as many as Dulgheru. Nine of those were errant forehands.

But the American, the runner-up at Wimbledon a year ago, then won seven games in a row.

In the first round, Williams started by ceding a tiebreaker against 58th-ranked Johanna Larsson before taking 12 of the last 15 games.