#WhyIStayed Creator Speaks Out: “I Loved Him, I Trusted Him, I Was Afraid of Him”
POSTED BY WLAS September 11th, 2014 0 COMMENTS

The haunting images from the controversial Ray Rice video of the Baltimore Ravens football star knocking out his then fiancée and now wife, Janay Rice, inside an Atlantic City casino elevator has triggered a national wake-up call.

And while some ask how Janay could possibly defend her abusive NFL player husband, others, like Beverly Gooden, a former victim of domestic abuse, fired off tweets listing the many reasons it took her a year to leave her own abuser — all ending with the hashtag #WhyIStayed.

The hashtag quickly went viral, igniting a coast-to-coast conversation on the topic.

“The reason I started the hashtag was to one give voice to the people out there who had their voice taken away,” Gooden explained today on “Good Morning America” alongside Dr. Phil, addressing the estimated 25% of American women who experience domestic violence.

Dr. Phil McGraw, who has testified on Capitol Hill on the issue of domestic violence, says the conversation that was sparked by Gooden’s hashtag is an important one to be heard.

“People are starting to understand what Beverly’s talking about here because the truth is that separation assault is a phenomenon that occurs when you attempt to leave the abuser, and even the two or three weeks after,” he explained. “There are more fatal injuries and serious injuries during that time than any other.”

The first time Gooden attempted her leave her abuser, “he laid down in front of the door, the door to our apartment and slept there the whole night so I couldn’t get out, so I didn’t leave,” she recalled. 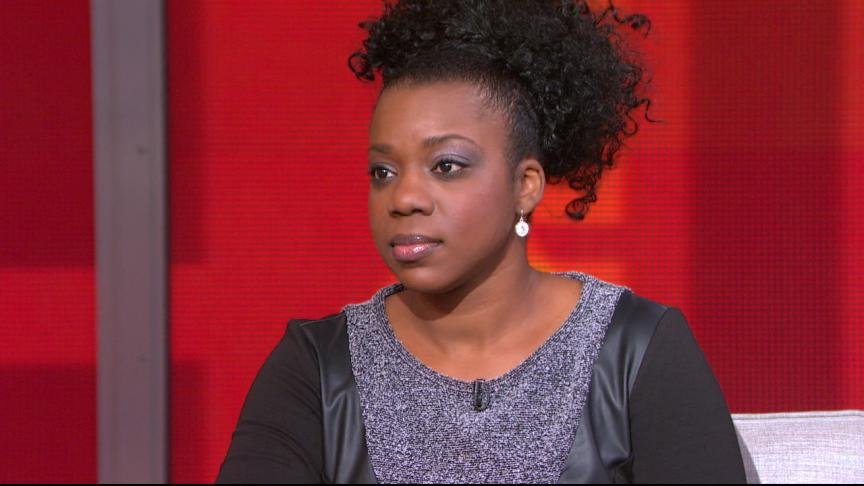 It takes an average of seven attempts for a victim to leave their abuser, according to the National Domestic Abuse Hotline. But for Gooden, as she explained in several of her tweets and elaborated upon this morning, “The whole main reason why I didn’t leave,” she said, “is because I loved him.”

“I loved him, I believed in him, I believed what he said when he said that he wouldn’t do it again, I trusted him, I was afraid of him,” said Gooden. “All of these reasons are invalidated a lot in the public eye as bad reasons why you stay. Fear is real. I was afraid of him because of being abused, I was afraid he would hurt me after I left. And all of those things are valid. Staying, although it may seem like a bad decision, sometimes it’s the only decision a woman can make.”

An abuser’s tactics to keep you confined to them are “not novel,” McGraw explained. “They come up with them every time to keep them there.”

The abuser’s number one tool is isolation.

“They cut you off from family, friends, church, others than can give you support and help you, so you’re left alone,” he said. “And they take away the phone, they take away money, and abuse is not just physical. It’s all of the erosion of the self-worth and self-esteem.”

Those feelings hit home with Gooden, who is now four years out of her abusive relationship, all too well. She offered up advice she found on domestic violence websites that helped saved her life to other victims who may be in the same situation.

“One is to start to save money in secret if you have to. That’s what I did, just a few dollars here and there,” Gooden explained. “They said to create a bag with clothing and toiletries and personal items that you may need, any heirlooms or anything important to you, and just keep it in a bag hidden away in a place where he won’t look, so that if at any given moment you need to grab that bag, you have everything you need within that bag.”

McGraw cautions, however, that the number one rule in this situation “needs to be safety.”

“I would hate for this debate to spur women to just precipitously jump up and either confront their abuser or leave without a plan,” he explained. “Number one rule is safety for you and your children. Have a plan and go about that plan.

McGraw’s wife’s foundation, When Georgia Smiled, has created an app called Aspire, which can be downloaded right to your phone, “and with a tap of a button,” he explained, “it sends out messages to five or six people you’ve designated that says ‘I need help, get here now.’ Even if they’re not ready to call the police, they can send a message to their mother or whoever that says, ‘come help me, don’t leave me alone.'”

Gooden was able to escape her abuser using the tools she found online, and now, she says, “I’m doing great.”

“I’m four years removed from leaving,” and more than anything, “I really want to change the conversation from, ‘Why did she stay?,’ to ‘Why did he hit her?’”