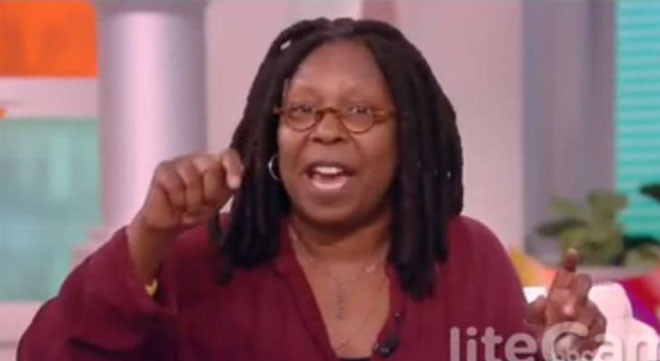 A controversial editorial cartoon that resurrected a racial stereotype is being defended by Whoopi Goldberg.

The cartoon, published earlier this week in the Boston Herald, mocks the recent breach of security at the White House as it shows an intruder taking a bath in President Barack Obama‘s bathtub and a joke caption saying, “Have you tried the new watermelon flavored toothpaste?”

Media sources report that the artist behind the cartoon, Jerry Holbert, said he had no intention of creating a racial link between watermelon and Obama, the country’s first black president. That response was apparently good enough for Goldberg, who told her co-hosts on “The View” she not only agrees with him but she uses the watermelon-flavored toothpaste described in the cartoon.

“We understand [the joke’s sensitivity] because we live with it,” Goldberg said on Thursday’s show. “But if it’s not something that’s in your consciousness that your parents haven’t explained to you that this has happened. No you’re not thinking about it.”

“I don’t believe he did it on purpose because I don’t think he was thinking about it,” she concluded.

On Wednesday, the Herald issued an apology for the cartoon in light of the backlash against it.

“Contributors to our Editorial and Opinion pages have the right to express their views, and satire is clearly used in Jerry Holbert’s cartoon today. That said, we sincerely regret if we inadvertently offended anyone and extend our sincere apologies,” the paper stated.