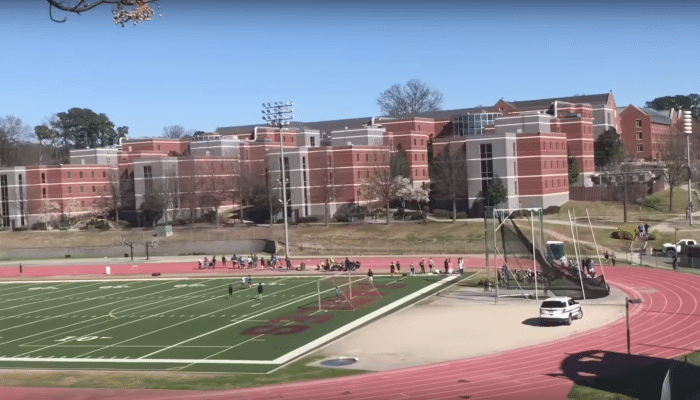 Students at a historically black college in North Carolina were planning a protest over what they said was racially charged comments and possibly terroristic threats on social media from a white classmate. Morgan Kendall, who was attending North Carolina Central University (NCCU) School Of Law, was accused of using “a racial slur on social media and said she wishes she could take credit for the pipe bomb packages that were sent to the Obamas and Clintons last month, according to WRAL, a local news outlet.

WRAL published a screenshot of a since-deleted Facebook post about last month’s series of explosive devices mailed to a number of liberal political figures. A person with the name Morgan Kendall commented beneath: “Wish I could take credit.” She also was alleged to have used the N-word in text messages. 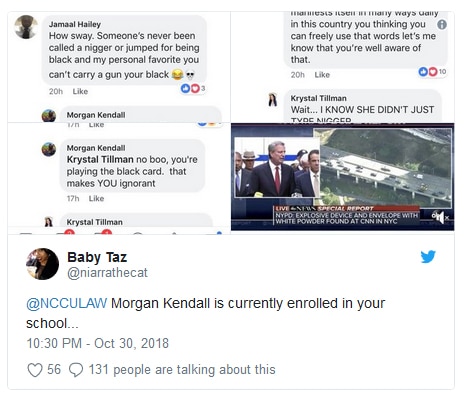 Students said they want Kendall kicked out of the school.

“I don’t feel safe,” one student, Kayla Britt, said. “I don’t know what she’s capable of, and I would like to see her expelled immediately.”

Instead of expulsion, the HBCU reportedly decided to suspend Kendall for the rest of this week while allowing her to return to her normal schedule on Monday. That decision didn’t sit well with students when they learned of the apparent punishment.

The campus controversy came a few months after it was reported that white people were becoming the majority of HBCU students.

This wasn’t the first time NCCU students said they felt let down by their HBCU’s administration. Groups of students staged a coordinated walk-out of classes early last month in response to the shooting death of one of their classmates. DeAndre Ballard was killed by a security guard under suspicious circumstances in an off-campus incident in September.

NCCU’s response to Ballard’s death left much to be desired, students said. The sentiment on campus was that NCCU was seemingly trying to distance itself from the incident instead of sympathizing and empathizing in the death of a member of the school’s community.

“The university is not associated with and does not have any contractual agreement with Campus Crossings, an independently-owned residential apartment complex,” NCCU said in a statement released Sept. 27. “The NCCU police department officers have no jurisdiction or connection with the Campus Crossings apartment complex nor with the security officer involved in the incident. NCCU does not endorse or recommend any specific rental property for students. Additionally, the university does not utilize the security services of the N.C. Detective Agency and does not hire any officers employed with this particular agency.”