A suspected white supremacist who is also the mayor of a Virginia town was being urged to resign after he was accused of posting and apparently deleted a racist social media post addressing the prospects of Joe Biden picking a Black woman to be his vice-presidential running mate.

A city council member called for Barry Presgraves, the mayor of Luray, a town in the Shenandoah Valley of the northern part of the commonwealth, to step down over the alleged Facebook post that was preserved through a screenshot, according to local news outlet WTOP. Presgraves’ alleged post said, “Joe Biden has just announced Aunt Jemima as his VP pick.” 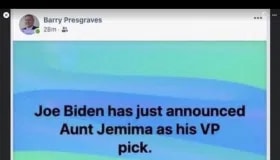 Leah Pence, the council member, sent an email on Monday to Presgraves encouraging him to resign.

“I am writing to strongly urge you to resign over a racist comment you made on Facebook,” Pence wrote. “The comment you posted has a type of humor that has not been appropriate or funny in my lifetime or yours.”

The alleged post was a racist nod to the distinct possibility that Biden could pick a Black woman to join him atop the Democratic ticket in November. It also came as the nation was protesting racism and having a racial reckoning.

The “Aunt Jemima” reference is racist and rooted in the offensive imagery created by the Quaker Oats Company. Aunt Jemima was originally depicted as a servant and closely resembled images of mammies—a derogatory term used to describe a Black nursemaid. Although the company decided to change Aunt Jemima’s image nearly three decades ago, its link to racist imagery still lingered.

One of the many incarnations of the “Aunt” — a relic of a term draped with racist overtones – appeared with a rag tied on her head. Another frequently used broken English that was many times associated with how slaves spoke: “I’s in town, honey!”

It is for those above reasons that Pence was demanding for Presgraves to quit.

Presgraves has served as the mayor of Luray since 2008 but was not seeking re-election this year, perhaps explaining his racist social media activity that was posted as his final term in office winds down.

Making “Aunt Jemima” references takes a page from the racist playbook that many other resentful white people have used to insult Black people.

Back in November, a hospital worker in Missouri sued his employer over an alleged series of microaggressions and flat-out racism at work that included a white co-worker calling a Black co-worker “Aunt Jemima.”

Not to be outdone, a Black woman from Tennessee called out her doctor for allegedly calling her “Aunt Jemima” when he entered the examination room.

Biden was expected to announce his decision at some point within the coming weeks.