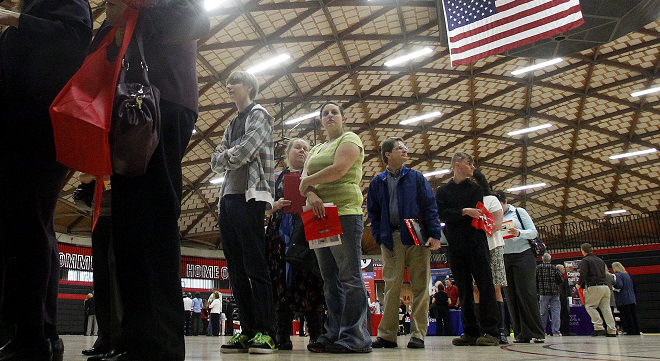 WASHINGTON (AP) — U.S. employers added 157,000 jobs in January and hiring was stronger over the past two years than previously thought, providing reassurance that the job market held steady while economic growth sputtered.

The hiring picture over the past two years looked better after the department’s annual revisions. Those showed employers added an average of roughly 180,000 jobs per month in 2012 and 2011, up from previous estimates of about 150,000. And hiring was stronger at the end of last year, averaging 200,000 new jobs in the final three months.

Stock futures rose after the report was released.

One notable change in the job market is the stronger contribution from construction firms. They added 28,000 jobs in January and nearly 100,000 in the past four months. The gains are consistent with a rebound in home construction and a broader recovery in housing.

Last month’s hiring should cushion the impact of the higher Social Security taxes that most consumers are paying this year. And it would help the economy resume growing after it shrank at an annual rate of 0.1 percent in the October-December quarter.

Higher Social Security taxes are reducing take-home pay for most Americans. A person earning $50,000 a year will have about $1,000 less to spend in 2013. A household with two high-paid workers will have up to $4,500 less. Taxes rose after a 2 percent cut, in place for two years, expired Jan. 1.

Analysts expect the Social Security tax increase to shave about a half-point off economic growth in 2013, since consumers drive about 70 percent of economic activity.

The hit to consumers is coming at a precarious moment for the economy. It contracted in the fourth quarter for the first time in 3½ years. The decline was driven largely by a steep cut in defense spending and a drop in exports. Analysts generally think those factors will prove temporary and that the economy will resume growing.

Still, the contraction last quarter points to what are likely to be key challenges for the economy this year: the prospect of sharp government spending cuts and uncertainty over whether Congress will agree to raise the federal borrowing cap.

Most analysts predict that the economy will grow again in the January-March quarter, though likely at a lackluster annual rate of around 1 percent. They expect the economy to expand about 2 percent for the full year.

In addition, homebuilders are stepping up construction to meet rising demand. That could generate even more construction jobs.

And home prices are rising steadily. That tends to make Americans feel wealthier and more likely to spend. Housing could add as much as 1 percentage point to economic growth this year, some economists estimate.

Auto sales reached their highest level in five years in 2012 and are expected to keep growing this year. That’s boosting production and hiring at U.S. automakers and their suppliers.