UCLA Gymnast Hits The Quan, The Whip, The Nae Nae On Her Way To Top Score [WATCH]
POSTED BY WLAS February 9th, 2016 0 COMMENTS 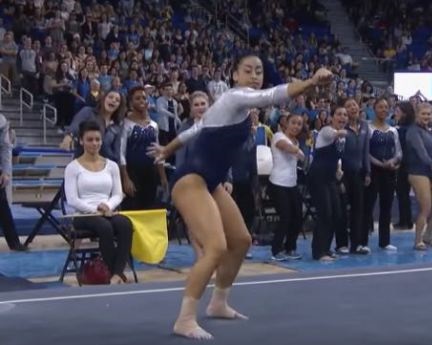 Black History Month has never been this Black. There’s Beyoncè’s “Formation” video, there was Cam Newton (Say what you want haters, he’s still the MVP) Serena Williams making it to the Australian Open final (she lost, but still) and Nate Parker’s Sundance Film Festival takeover. (It happened at the end of January, but we’re still counting it.)

Now, UCLA gymnastics has presented up with yet another example of unequivocal blackness in the form of Sophina DeJesus. This young lady decided to shake up the more traditional gymnastic floor routine with a little flair of her own. While still hitting all the athletic tumbling runs and splits that characterize a regular routine, she threw in a few popular dance moves including the Quan, the Whip, The Nae Nae a salute and even a little dab, shared with her teammate at the end.

We can do nothing but admire this young woman, and the judges and audience liked it, too, cheering the performance which ultimately lead to a stellar 9.925. We salute you, Sophina, and your #Blackgirlmagic. Keep dabbin’ on ’em.