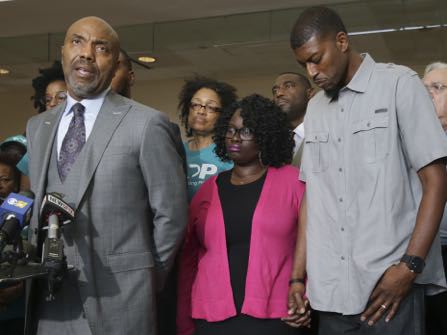 DALLAS (AP) — The U.S. Justice Department has launched an investigation into the fatal shooting of a black 15-year-old by a white police officer, a spokeswoman for the Dallas County District Attorney’s Office confirmed Thursday.

The investigation prompted by the April 29 fatal shooting of Jordan Edwards by Balch Springs police Officer Roy Oliver is separate from the district attorney’s prosecution of Oliver on a murder charge, said Brittany Dunn, a spokeswoman for District Attorney Faith Johnson. She said she did not know the scope and focus of the investigation of the Balch Spring Police Department, and a message left for a Justice Department spokesman was not returned.

Oliver was fired and charged with murder in the April 29 shooting and is free on bond.

Edwards’ family and its attorney said Johnson advised them of the federal investigation during a meeting Thursday.

A Justice Department investigation could end in a wide variety of outcomes — some civil, some criminal.

Civil rights activists are watching closely for clues to how the Trump administration’s Justice Department intends to handle racially charged shootings by police. But conclusions are hard to draw because each case is so different and prosecutions of officers are rare.

In the case of Ferguson, Missouri, the Department of Justice investigated both whether the fatal shooting of Michael Brown merited civil rights charges against Ferguson Police Officer Darren Wilson and whether there were systematic issues of civil rights violations inside the city’s police department. Investigators did not support charges against the officer, but found systematic constitutional violations for stopping people without reasonable suspicion, using unreasonable force and other charges.

Other incidents of officer-involved shootings in recent years have involved bringing federal charges against officers as individuals.

Earlier this month, Officer Michael Slager in South Carolina pleaded guilty to a federal charge that he had violated the civil rights of Walter Scott by shooting without justification. A witness shot a cellphone video in the 2015 shooting that captured images of Slager firing at Scott as he ran away, killing him.

The murder warrant issued against Oliver was based on evidence that suggested Oliver “intended to cause serious bodily injury and commit an act clearly dangerous to human life that caused the death,” the Dallas County Sheriff’s Office said in a statement.

Oliver fired a rifle at a car full of teenagers leaving a party, fatally shooting Edwards who was a passenger in the vehicle. The teen’s death led to protests calling for Oliver to be fired and charged.