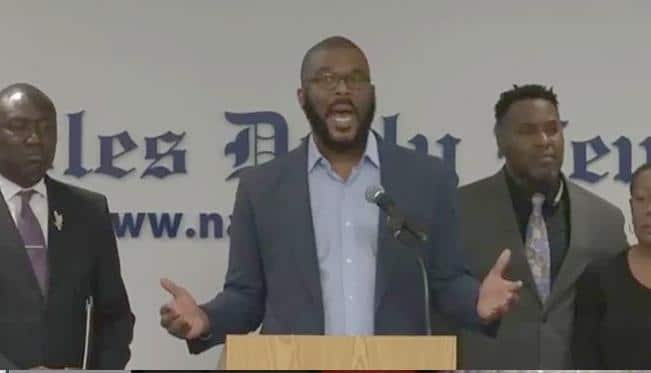 Tyler Perry joined famed criminal attorney Benjamin Crump earlier today to announce that he’s upping the reward for any info that leads to solving a mysterious case of 2 missing men in Florida.

The case is also interesting because a former cop is the main person of interest.

Perry made the announcement in Naples, FL and he’s offering $200K for any help in the cases of the missing Collier County men — Felipe Santos and Terrance Williams.

Santos went missing in October 2003 and Williams in January 2004 and here’s where the ex-cop, Steven Calkins, comes into play. Calkins, a corporal with the Collier County Sheriff’s office at the time, is supposedly the last person to see them both alive.

Perry has been involved in trying to solve the mysterious disappearance for years, already offering a $100K reward before doubling it Tuesday to $200K. He’s also close to Williams’ mother, who was also at the press conference as well.

Crump announced that on top of the reward money, Williams’ family is filing a wrongful death suit against Calkins in hopes of getting testimony out of him.

The former cop was seen pulling over Williams in 2004 near a cemetery, but originally told another cop Williams’ car was abandoned. He even denied having any contact with Williams, but later his story changed and he said he dropped him off at a Circle K gas station.

The story of Santos’ disappearance is eerily similar to the Williams case. Calkins was dispatched to the scene of a minor car accident involving Santo who was allegedly arrested him for driving without a license. But Santos was never booked at the local jails. Calkins told investigators he dropped him off at a Circle K as well.

Calkins was never charged in either case, which has been cold for nearly 15 years now. He was fired for lying, though and the Sheriff’s Office says he is still a person of interest.