Twin doctors Compete on “The Amazing Race”
POSTED BY WLAS May 1st, 2013 0 COMMENTS 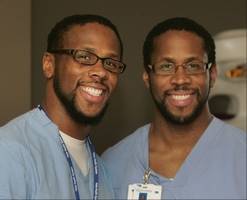