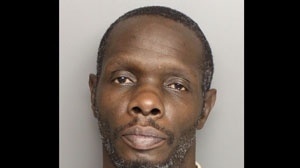 GREENVILLE COUNTY, S.C. — A man who went on a talk show because he wanted to take a polygraph test about a child sex crime accusation ended up failing the test, and he is now under arrest.

On Wednesday, the Greenville County Sheriff’s Office was contacted by a representative of the Steve Wilkos show who told deputies Dennis Prude had appeared on the show, and failed a polygraph test regarding criminal sexual conduct with a 10-year-old girl in Greenville from August to October 2010.

Steve Wilkos show has been on air since September 2007, two months after Wilkos left the Jerry Springer Show. He had been Springer’s director of security.

Greenville County sheriff’s investigators had learned about the case in May after it was referred to them by Children Services in Akron, Ohio, where the victim moved after living in Greenville. Investigators said the child, who is now 13, still lives in Ohio.

Investigators said Prude was living in an unknown location in Alabama.

After he failed the polygraph test, Prude told the Steve Wilkos Show staff he wanted to meet with the investigator working the case in Greenville.

The Steve Wilkos Show provided transportation for Prude to get to Greenville County to meet with the investigator.

Master Deputy Jonathan Smith said, “That’s the way it’s been reported to us. That he requested to go on the show. He requested to take the polygraph test to clear his name. I can’t speculate why he would do that. The only thing I can say is he may have felt that he didn’t do anything wrong and to go on there and take a polygraph was going to prove to everyone he didn’t do anything wrong.”

A statement from The Steve Wilkos Show said: “Mr. Prude failed the polygraph test during a taping this week and as a result, Mr. Prude agreed to turn himself in to authorities in Greenville, S.C. escorted by our show’s security team. The full episode will air on Jan. 30, 2014, on The Steve Wilkos Show.”

The investigator then presented the case to a magistrate and got a warrant for Prude’s arrest on a charge of second-degree criminal sexual conduct with a minor.

Prude was arrested Thursday. He is being held in the Greenville County Detention Center with bond set at $50,000.

Smith said he told Steve Wilkos show staff members that investigators appreciated what they did.

“They could have very easily dismissed it and not contacted law enforcement regarding what happened,” he said.