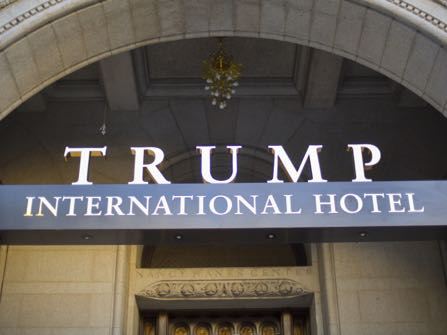 WASHINGTON (AP) — House Democrats warned on Wednesday that they’ll make Donald Trump’s splashy new Washington hotel a big headache if he doesn’t dump his ownership stake in it before taking office as the nation’s 45th president.

If he does so without divesting himself from his global business empire, the Trump International Hotel a few blocks from the White House could be the least of the new president’s political and legal aches and pains. Democrats, who will control none of the branches of federal government next year, signaled they’ll be ready to criticize Trump on ethics and potential conflicts when he takes office Jan. 20.

Top Democrats on the House Oversight and Transportation committees said the General Services Administration, which holds the lease on the Trump International Hotel, told members of Congress Dec. 8 that “Mr. Trump must divest himself not only of managerial control, but of all ownership interest,” or breach the $180 million contract, according to a letter they released.

The agency said in a statement that it “would be premature” for the GSA to decide before Trump takes office whether he is in danger of a contract breach. The agency’s statement did not address the hypothetical that Democrats said they posed in the Dec. 8 briefing: whether, if nothing changes, Trump would violate the lease on the government-owned Old Post Office building that houses the hotel.

There was no immediate sign of change either on the hotel or an array of other potential conflicts Trump faces. He has refused to follow the precedents set by other incoming presidents to firmly separate from his private businesses. Trump has said he’ll step away from his businesses and turn over management to his adult children and executives — leaving open the prospect that he’ll retain his ownership stake.

That hands Democrats a quiver of potential weapons to use against the incoming president.

Trump’s team has told reporters that he’ll discuss the issue of any potential conflicts at a news conference next month. The Trump Organization has interests in about 500 companies around the world, though many appear to be companies set up for legal and tax purposes with little business operations.

On Wednesday, Democrats left no doubt they are readying for battle, and the Trump hotel on Pennsylvania Avenue seems to be an early target.

At issue are 43 words of the lease’s clause 37.19 on page 103, which has been interpreted by some experts on government contracting law — and Trump critics — to force the president-elect to unload his equity stake in the hotel near the White House. The document’s key part: No “elected official of the government of the United States” shall be “admitted to any share or part of this lease.”

The Democrats said they specifically asked a GSA official Dec. 8 whether Trump would breach the contract if he takes office and nothing changes — and they heard the agency official confirm that hypothetical. The lawmakers added that the president-elect’s daughter Ivanka is the chief contact for the agency — an “obvious” conflict, they wrote to GSA Administrator Denise Turner Roth.

The hotel has been a focus of criticism by government ethics experts. In addition to any breach of the lease, they worry that foreign governments will try to curry favor with the president-elect by booking rooms for their officials and hosting events there.

The Trump Organization won the right to lease the Old Post Office building on Pennsylvania Avenue in 2012, beating out several groups. Trump and the GSA took more than a year to hammer out a 60-year lease for its use.

This story has been corrected to clarify that the government owns the Old Post Office building, not the hotel.