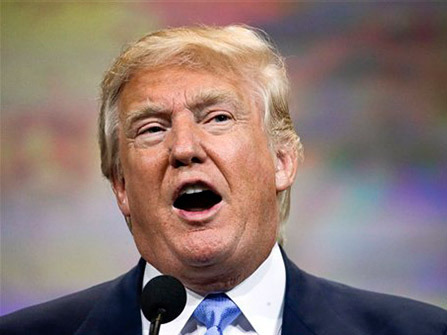 Yes, you read that right. Donald Trump, who yesterday, declared his candidacy for president, says if Oprah Winfrey joined him on ticket, assuming he would ever get nominated, says he’d have an unbeatable hand.

“I think Oprah would be great,” he added. “I’d love to have Oprah. I think we’d win easily, actually.

In an interview set to air on ABC with “Good Morning America” co-anchor and “This Week” moderator George Stephanopoulos, Trump discussed the possibility which was a notion he floated back in 1999 when he was flirting with the possibility of being a Reform Party presidential candidate.

“She’s great, she’s talented, she’s a friend of mine,” Trump said. “She’s a good person. I’ve been on her show. In fact, I was on her show her last week, she said, ‘Could I be on her show with the whole family?’” Trump said. “I like Oprah. I mean, is that supposed to be a bad thing? I don’t think so.”

OK, here’s all Trump needs to know. Again, as we said in our opening sentence, folks in Hell want ice water … but they’re never going to get it.