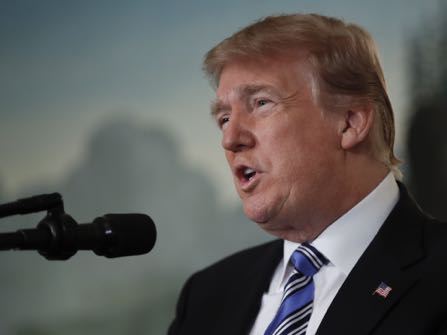 WASHINGTON (AP) — Declaring the nation united and grieving with “one heavy heart,” President Donald Trump promised Thursday to tackle school safety and “the difficult issue of mental health” in response to the deadly shooting in Florida. He made no mention of the scourge of gun violence.

Not always a natural in the role of national comforter, Trump spoke deliberately, at one point directly addressing children who may feel “lost, alone, confused or even scared.”

“I want you to know that you are never alone and you never will be,” Trump said. “You have people who care about you, who love you, and who will do anything at all to protect you.”

While Trump stressed the importance of mental health and school safety improvements, his latest budget request would slash Medicaid, the major source of federal funding for treating mental health problems, and cut school safety programs by more than a third. Last year, he signed a resolution blocking an Obama-era rule designed to keep guns out of the hands of certain mentally disabled people.

The president spoke to the nation from the White House, one day after a former student with an AR-15 rifle opened fire at a high school in Parkland, Florida, killing 17 people and injuring 14 more. It was the nation’s deadliest school shooting since a gunman attacked an elementary school in Newtown, Connecticut, more than five years ago.

Trump, who owns a private club in Palm Beach, Florida, about 40 miles away, said he planned to visit the grieving community, but no date was immediately set. He canceled plans to promote his infrastructure plan in Orlando on Friday and to attend a campaign rally in Pennsylvania next week.

Trump’s silence on guns was noted with displeasure by many who are seeking tougher firearm restrictions. But the White House said the president wanted to keep his remarks focused on the victims. Spokeswoman Sarah Huckabee Sanders said the point was “to talk about grief and show compassion in unifying the country.”

Before he was a candidate, Trump at one point favored some tighter gun regulations. But he embraced gun rights as a candidate, and the National Rifle Association spent $30 million in support of his campaign.

During his brief, televised statement, Trump said he wanted to work to “create a culture in our country that embraces the dignity of life,” a phrase likely to resonate with his conservative base.

He pledged to work with state and local officials to “help secure our schools and tackle the difficult issue of mental health,” adding that safe schools would be a key focus when he meets with governors and state attorneys general later this month.

Trump made no specific policy recommendations, and he did not answer shouted questions about guns as he exited the room.

In contrast, former President Barack Obama tweeted out a call for “long overdue, common-sense gun safety laws.” Obama wrote: “We are grieving with Parkland. But we are not powerless. Caring for our kids is our first job.”

In reacting to previous mass shootings, Trump has largely focused on mental health as a cause, dismissing questions about gun control. After a shooting at a Texas church in November left more than two dozen dead, the president said, “This isn’t a guns situation.”

The leader of a white nationalist militia called the Republic of Florida said Cruz was a member of his group and had participated in exercises in Tallahassee. But neither the Sheriff’s Office in Tallahassee nor the Southern Poverty Law Center could confirm any link between Cruz and the militia.

Trump was criticized in early August for saying that both white nationalists and counter-protesters were responsible for the violent clashes at a white nationalist rally in Charlottesville, Virginia.

While Trump has offered somber responses to some tragedies, he has also drawn criticism for other reactions.

After the Orlando shootings at a gay nightclub that left 49 dead in June 2016, then-candidate Trump tweeted, “Appreciate the congrats for being right on radical Islamic terrorism.” In the wake of a deadly terror attack in London last June, he went after Mayor Sadiq Khan on Twitter.

News of Wednesday afternoon’s shooting had come as the White House was embroiled in a weeklong scandal surrounding the handling of domestic abuse allegations against Rob Porter, a top aide who resigned last week.

The typically daily White House press briefing was repeatedly delayed, as aides tried to craft a strategy on that issue. One option was to have chief of staff John Kelly, who has come under intense pressure for his handling of the Porter matter, be part of the briefing, according to two White House officials not authorized to publicly discuss internal deliberations.

Once the magnitude of the Florida tragedy became clear, the White House canceled the briefing. The president tweeted his condolences and the White House deliberated its next move.

Kelly was not in the room when Trump addressed the nation on Thursday morning, and his job security remained an open question. But with the West Wing focused on the shooting aftermath, any immediate change seemed unlikely.