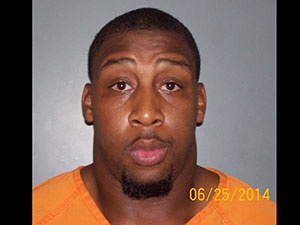 LAURENS COUNTY, S.C. —The trooper who arrested an NFL player in the Upstate Wednesday morning has been suspended, according to Sherri Iacobelli with the South Carolina Department of Public Safety.

Lance Cpl. R.S. Salter was suspended Thursday, Iacobelli said. She said he has been with the South Carolina Highway Patrol since July of 2000. She said the investigation will look into the circumstances surrounding the traffic stop and arrest.

The Highway Patrol has not yet said why Montgomery was arrested rather than ticketed, but they did say an arrest is up to the trooper’s discretion.

Montgomery plays for the Cincinnati Bengals. He was added to the roster in April.

He was drafted by the Houston Texans in 2013, but did not appear in any of his first seven games before he was released, according to NFL.com.

The website said the Texans cut Montgomery due to marijuana use, but Montgomery immediately denied using the drug via a statement by his agent, Jeff Guerriero.

It said the Oakland Raiders signed Montgomery to their practice squad in December but he was placed on injured reserve after injuring his knee in his very first practice.

Montgomery is from Greenwood and played for Louisiana State University.