A jury on Monday acquitted one white police officer and returned a mixed verdict for two others who were on trial for beating an undercover Black detective they purportedly mistook for a protester marching against police violence at an event in 2017 in St. Louis.

Notably, the jury was all white.

Missouri Rep. Cori Bush rhetorically wondered in a tweet reacting to the news: “If an undercover cop can’t get justice, how will the rest of us who have been maced, shot, beaten, and brutalized ever get justice?”

Jury deliberations were scheduled to resume Monday in the trial of three white police officers charged with beating a handcuffed undercover Black detective during the 2017 protests in St. Louis. All three have been charged with depriving Luther Hall of his civil rights under the color of law.

The case is testing the so-called Blue Wall of Silence — the unwritten rule of unwavering solidarity among law enforcement no matter the stakes — as officers have begun turning on one another. 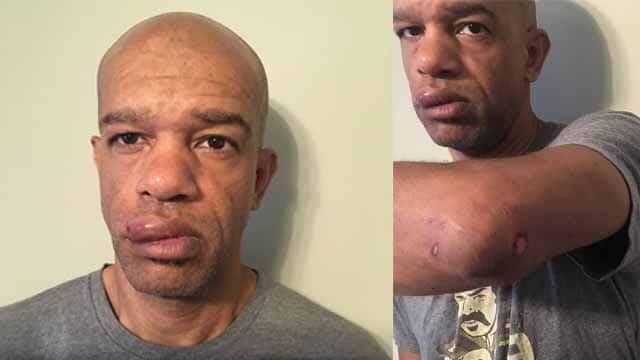 Two other former officers, Randy Hays and Bailey Colletta, previously pleaded guilty. Back in 2018, Hays pleaded guilty to one count of deprivation of rights under the law. He has admitted to beating Hall with a baton and pushing him down on the ground.

According to the Associated Press, Colletta pleaded guilty to making false statements to a grand jury about the assault. A federal prosecutor said text messages between officers ahead of the protest suggested an “eagerness for violence against protesters.”

Hays testified against his former colleagues, saying Boone kept his knee on Hall’s shoulder and Korte kicked Hall in the head while he was lying face down on the ground. Hays was questioned about day-after texts justifying the assault during which he claimed Hall had resisted arrest.

Hays insisted that upon subsequent recollection, he was wrong, and Hall did not resist arrest. But defense attorneys representing the other officers seized on inconsistencies in Hays’ previous statements and testimony. He is awaiting sentencing and faces up to 10 years.

Many other current and former officers also testified during the trial. Uzoma Onwumere, an FBI agent, was a St. Louis police officer in 2017 and witnessed Hall’s arrest and assault. Onwumere testified he watched Myers beat Hall despite being handcuffed.

Sgt. Joseph Marcantano testified he got blood on his hands when he pulled down a neck gaiter around Hall’s face. When questioned by the defense, Marcantano said he never reported what he knew to the Internal Affairs Department.

Hall posed as a demonstrator during protests after the not guilty verdict of former officer Jason Stockley, who was acquitted in the killing of Anthony Lamar Smith, a 24-year-old Black man who died after a questionable traffic stop in 2011.

Hall reportedly said he was beaten “like Rodney King” and sustained injuries requiring multiple surgeries. The city recently reached a settlement with Hall for $5 million.

A charge of deprivation of civil rights under the law is a high bar to meet, with many cases ending without federal charges. As explained by the Justice Department, “Section 242 of Title 18 makes it a crime for a person acting under color of any law to willfully deprive a person of a right or privilege protected by the Constitution or laws of the United States.” Under the color of law is a phrase that applies to official actors at the federal, state, or local level, including law enforcement.

The Department of Justice (DOJ) has declined to prosecute numerous Black people killed or beaten by police in recent years. In an example of that truth resonating with the people of St. Louis, the DOJ declined to bring charges against Darren Wilson, the police officer in nearby Ferguson who shot and killed the unarmed and 18-year-old Michael Brown in 2014.

That trend of failing to hold police accountable for their actions has continued nearly unabated.