A historically Black university in Louisiana is trying to make its mark in the medical marijuana industry.

Southern University and Agricultural and Medicinal College in Baton Rouge will launch a medical marijuana program after a contract with Advanced Biomedics, a Louisiana-based company specializing in pharmaceutical-grade marijuana products, was approved on Friday (May 25). The move will make the HBCU the first to start a program about legalized cannabis, WAFB, a Baton Rouge news source, reported.

“This is a momentous event,” Bobby R. Phills, chancellor of the Southern University Agricultural Center and dean of the school’s College of Agricultural, Family and Consumer Sciences, said in a news release. “We are extremely excited to be able to provide quality medicine for the citizens of Louisiana.” 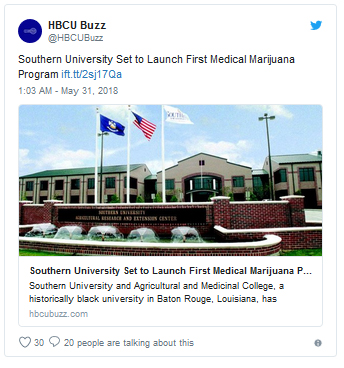 Southen University has joined the cannabis ranks with Louisiana State University, with both public schools set to cultivate and research marijuana in campus facilities, Mic reported. No other institutions have been designated as legal growers and researchers of medical cannabis in the state, which legalized the substance in 2016 but prohibited recreational use.

Southern University Agricultural Research and Extension Center, which focuses on livestock, farming research and community education, will oversee the program, according to the report. Advanced Biomedics is set to automatically renew its contract with the school for two consecutive five-year periods.

The university is set to make a sizeable amount from the marijuana facilities, Phillis added. The Agricultural Research Center will receive $6 million, and Southern will get a $1 million signing bonus with each contract renewal.

“This groundbreaking research opportunity will also provide revenue for the University and economic development in North Baton Rouge,” the chancellor said.

Southern University’s product will be ready for distribution at Louisiana dispensaries in early 2019.