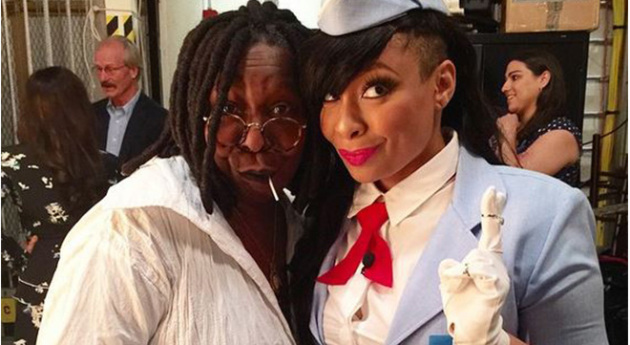 PHILADELPHIA (AP) — Here are the latest developments from the release of court documents indicating Bill Cosby admitted in 2005 to obtaining quaaludes with the intent of giving them to women with whom he wanted to have sex (all times local):

The Bounce television network says it is pulling its reruns of Bill Cosby’s 1990s-era CBS sitcom from the air immediately.

The network is geared toward black viewers. It had aired back-to-back episodes of “Cosby” each weekday at 5 p.m. The sitcom originally aired on CBS from 1996 to 2000.

Bounce’s decision Tuesday comes less than 24 hours after The Associated Press reported on court documents that showed the comedian admitted obtaining quaaludes to give to young women before having sex.

Other Cosby-related projects ended late last fall when women came forward with allegations that Cosby had assaulted them.

Whoopi Goldberg is still reserving judgment on Bill Cosby after the unsealing of testimony in which he said he obtained quaaludes to give women he wanted sex with.

Goldberg said Tuesday on ABC’s “The View” that “you are still innocent until proven guilty.” She says Cosby “has not been proven a rapist.”

Cosby’s admission came in a 2005 deposition in a sexual-abuse lawsuit he later settled. The Associated Press went to court to compel the release of the material.

Goldberg was reiterating a stance she’s held since last winter when more than a dozen women came forward to accuse Cosby of abuse.

“The View” co-host Raven-Symone starred on Cosby’s 1980s sitcom. She says she doesn’t like talking about the allegations because he helped launch her career.

Lawyers for women pursuing criminal and civil cases against Bill Cosby say his admission that he obtained quaaludes to give young women before sex could bolster their claims.

Court documents unsealed Monday show that Cosby says he gave a 19-year-old woman the sedative before they had sex in the 1970s. She is one of three women now suing him for defamation.

The defamation suit accuses Cosby of branding them liars when his representatives denied their accusations of being drugged and sexually assaulted.

Meanwhile, lawyer Gloria Allred is pressing to have criminal charges filed in California. Her client says Cosby sexually abused her at the Playboy Mansion when she was 15. Cosby’s lawyers are fighting the potential child-sex charges.

Lawyers for the 77-year-old actor have not returned messages.