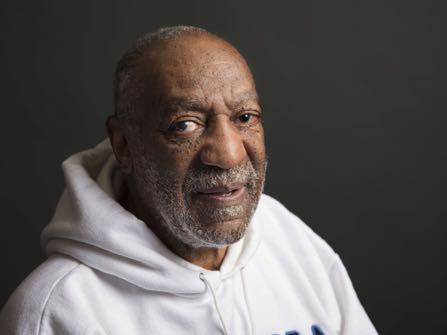 NEW YORK (AP) — NBC has scrapped a Bill Cosby comedy that was under development, the second outlet within a day to put off or abandon a Cosby project after another sexual assault allegation against the comic emerged.

NBC spokeswoman Rebecca Marks said Wednesday the project “is no longer under development,” and had no further comment.

TV Land followed up by removing “Cosby Show” imagery from their website and announced they would no longer broadcast “Cosby Show” reruns.

Netflix announced late Tuesday that it was postponing the Nov. 27 premiere of a new Cosby standup comedy special, giving no hint about whether it will ever be aired. Hours earlier in an interview with “Entertainment Tonight,” actress Janice Dickinson became the third woman in recent weeks to allege she’d been assaulted by Cosby — charges strongly denied by the comedian’s lawyer.

Dickinson told “Entertainment Tonight” that Cosby had given her red wine and a pill when they were together in a Lake Tahoe, California, hotel room in 1982. When she woke up the next morning, “I wasn’t wearing my pajamas and I remembered before I passed out I had been sexually assaulted by this man.”

Cosby’s lawyer, Martin Singer, said in a letter to The Associated Press that Dickinson’s charges were “false and outlandish” and were contradicted by Dickinson herself in a published autobiography. Cosby’s spokesman, David Brokaw, has not returned calls for comment.

The spiraling scandal — which involves allegations that were widely reported on a decade ago as well as new accusations — has threatened the 77-year-old comedian’s reputation as America’s TV dad at a time when he was launching a comeback. A year ago a standup special — his first in 30 years — aired on Comedy Central and drew a hefty audience of 2 million viewers. His prospective new series was announced by NBC in January.

Meanwhile, he continued to stay busy on the road. He has at least 35 performances scheduled throughout the U.S. and Canada through May 2015. None of the performances has been cancelled.

At one of the venues, the Sandusky State Theater in Sandusky, Ohio, there’s been no negative feedback, said David L. Taylor, the site’s executive director. There’s been one query from the community about whether the scheduled Jan. 30 performance is still on.

“If the show were to cancel, everybody would obviously get full refunds,” Taylor said.

Additionally, the Smithsonian’s National Museum of African Art has not changed its plans for an exhibition featuring Cosby’s African-American art collection alongside African artworks. The show opened this month on the National Mall and is scheduled to remain on view through early 2016.

“The exhibition has been very well received. We’ve actually had record numbers through the door,” spokesman Eddie Burke said, adding the museum has had no complaints.

Cosby was asked about the growing furor by an AP reporter when he was promoting the exhibit earlier this month.

At the time the AP interviewed Cosby, on Nov. 6, the story of sexual assault allegations involved long-circulated accusations from several women and recent criticism from comedian Hannibal Buress. At the time, the AP asked Cosby about the allegations and he declined to comment, saying “We don’t answer that.”

The AP mentioned the allegations and that he declined to comment at the end of its story, which, like the interview, was primarily about his donation of more than 50 artworks to the National Museum of African Art in Washington.

Since then, two women have come forward publicly to accuse him of sexual assault, Netflix and NBC cut ties and Cosby canceled appearances on David Letterman and Queen Latifah’s talk shows. In recent days, as the allegations gained increasing attention, AP went back through the full video of the Nov. 6 interview and decided to publish Cosby’s full reaction to questions about the claims.

The AP was among a handful of news organizations granted interviews with Cosby in connection with the art donation. After his initial refusal to comment — as the interview was winding down but with the camera still running and Cosby wearing a lapel microphone — the comedian asked the AP to not use the brief on-camera denial he had just made about the allegations. “And I would appreciate it if it was scuttled,” he said.

The interview was on the record. The AP had made no agreement to avoid questions about the allegations or to withhold publishing any of his comments at any time.

NBC’s project was in the very early stages, without a script or commitment to production. But it would have brought Cosby back to the network where he had reigned in the 1980s with the top-rated “The Cosby Show.”

There’s some precedent for a network burying a project because of stories involving a star’s personal life. NBC shelved a two-hour TV movie, “Frogmen,” starring O.J. Simpson in 1994 after the former football star was implicated in his wife’s death.

Dickinson said she had met Cosby before Lake Tahoe when her agent had introduced them, hoping that she could get a job on “The Cosby Show.” The actress said she came to the resort where Cosby was performing at his urging after he said that he would help her with her singing career.

She said she had never confronted Cosby about the incident. Her spokesman did not return messages from the AP on Wednesday.

Dickinson had told a different story in her 2002 autobiography, in which she described stopping at his hotel room door when he invited her in after dinner. After she declined, Dickinson said Cosby told her, “After all I’ve done for you, this is what I get?” and slammed the door in her face, she wrote.

She told “Entertainment Tonight” that Cosby and his lawyers pressured her and the publishers not to tell the real story.

Singer said the publisher sent the pages in Dickinson’s book about Cosby to Cosby’s publicist prior to publication.

He said the first Cosby heard of any assault allegation came in the “Entertainment Tonight” interview, and suggested Dickinson was “seeking publicity to bolster her fading career.”

Cosby, who was never criminally charged in any case, settled a civil suit in 2006 with another woman over an alleged incident two years before.