The Almighty Dollar: Creflo Will Get His Plane
POSTED BY WLAS June 4th, 2015 0 COMMENTS 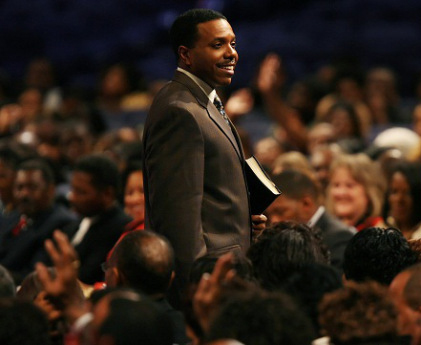 When last we heard from Creflo Dollar, he was saying that despite a backlash from those who thought his demands for a fourth plane were excessive, if God wanted him to get his $65 million private jet, then God would make a way. Well, it appears that the Almighty has spoken and Creflo and his World Changers Church International will get a new plane.

Dollar insists that he needs the plane to continue his good works. At first, Dollar attempted to crowdfund the jet’s purchase, but that effort was ended prematurely after the church’s need for the plane was questioned. But in a statement issued this week, World Changers Church’s board said that they have agreed to purchase the plane, that they did so as a united group and it was not just Dollar’s decision, and that furthermore, nobody has the right to question their decisions as they are led by the Lord.

“It is our belief that this ministry is called to serve people globally — to literally change the world according to the Great Commission — and our infrastructure and operational plan reflect the worldwide nature of that assignment. Our pastors share the gospel of Jesus more than 300 times per year — in churches, arenas, venues, convention centers, stadiums and other facilities across the entire planet — and are committed to aggressive travel schedules that cannot be fulfilled via any means other than private aircraft,” said the WCCI board in a statement posted on the website of Creflo Dollar Ministries.

“A long-range, high-speed, intercontinental jet aircraft is a tool that is necessary in order to fulfill the mission of the ministry. In light of an unfortunate accident that recently resulted in the ministry’s aircraft being declared a total loss, it is our intention to purchase another airplane at a time, place and price of our choosing,” the statement continued.

It was then confirmed later in the statement that the next plane the ministry intends to acquire is the controversial Gulfstream G650.

“We plan to acquire a Gulfstream G650 because it is the best, and it is a reflection of the level of excellence at which this organization chooses to operate. We, the World Changers family, so value the lives, the safety and the well-being of our pastors and leaders that we wish to provide to them the best air travel experience possible,” said the statement from the WCCI board.

Despite the statement from WCCI, however, it might be a while before the church can acquire the G650 jet even if they are able to raise the nearly $70 million needed to purchase the aircraft, according to Gulfstream’s sales director for New Jersey, Delaware and New York, Kevin Valik.

“It’s kind of a tough detail,” Valik told The Christian Post in a telephone interview Tuesday.

He said there are only 120 Gulfstream G650 jets that have been delivered globally since the company started meeting orders on the jet in 2013.

Since 2013, the company has delivered about 50 of the jets annually and they are getting orders for the multimillion dollar aircraft “every day.” The company now has a backlog on orders for the aircraft through the beginning of 2018.

Getting a used G650 also appears to have gotten a lot tougher since March when the company advertised one on it’s website for $67,950,000.

“We are no longer working with that seller,” said Valik, who noted that he doesn’t know if the seller wants to keep the plane now or might be trying to sell it through other avenues.