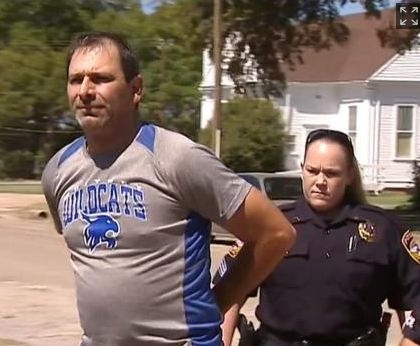 Police say a Texas man who claimed members from the Black Lives Matter movement vandalized his car actually concocted the entire incident in an attempt to collect insurance money.

Scott Lattin made headlines earlier this month, after he reported that members of the movement slashed his seats and spray-painted “Black Lives Matter” on his truck — an act that amounted to $5,000 in damages. He said he was targeted because of the banners on his white picket fence that support police and a memorial for Deputy Darren Goforth, who was gunned down in Houston.

Police realized Lattin’s story didn’t add up after watching an interview he did with Fox 4, during which he added details to the story that weren’t in the police report.

Lattin said he found his vehicle torn to shreds, with $5,000 worth of damage done to it. But his downfall may have been his interview with Fox 4. In it, he told reporters that someone had ripped out his glove box and slashed his seats, damage that police didn’t see when Lattin initially filed a police report.

“We had initial video when the officers took the report and then when we saw your story on Channel 4,” Whitney Police Chief Chris Bentley told the station. “When we looked at those two videos, there were some differences in those and that led us to take the investigation into a different direction.”

Calling the incident “disturbing,” Bentley urged people to stop donating to a GoFundMe Lattin created to pull in donations. Before he was outed, he made nearly $6,000 on the crowd-funding site.

Lattin’s actions to smear the BLM movement has pointed out the biggest problem with the nation’s view of the group. They have been accused of being an extremist movement because of the actions of others who’ve used the name to their advantage.

Lattin was charged with making a false police report, with additional charges pending.