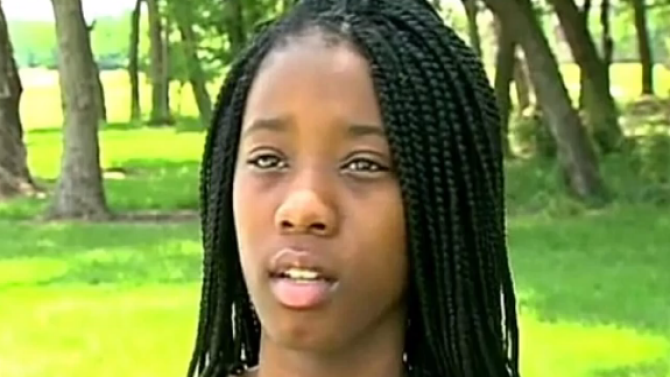 You may remember that in 2013, then 15-year-old Dajerria Becton was at a pool party in McKinney, Texas that was breaking up after several 911 callers said the party was getting out of hand. Becton, who was a bystander, was forced to the ground in her bathing suit by a McKinney officer, Eric Casebolt.

The officer resigned four days after the incident. No charges were ever filed, but Becton’s family sued. Video shot of the incident showed Casebolt and the officers targeting Black teens. Becton’ experience was traumatizing, says her lawyer, Kim T. Cole.

“This girl will never be the same,” Cole said. “Anyone who has been a teenage Black girl knows how hard it is, and to have this type of negative publicity, in your bikini, shown all over the world. It tore her up. We don’t know who she would have been had this not happened.” Cole added that Becton plans to throw another pool party for her client to celebrate the settlement.

The family of a teen in a viral video that showed a McKinney police officer forcing her onto her stomach and placing his knees on her back while breaking up a pool party has reached a settlement with the officer and the city of McKinney in a federal lawsuit, the city said in a joint news release.

The statement said all claims against then-Officer Eric Casebolt and the city of McKinney will be dismissed. Under the terms of the settlement, the plaintiffs and their attorneys will be paid $184,850 by the self-insurance risk pool for the city of McKinney, with $148,850 going to Dajerria Becton, the 15-year-old shown in the video.

“While the events precipitating this case are regrettable,” the statement said, “the City of McKinney and the McKinney Police Department would like to express their thanks to the community for its commitment to inclusiveness, order, and unity. ”

Becton’s family had filed a $5 million federal lawsuit against Casebolt after the 2015 incident at the Craig Ranch North subdivision in southwest McKinney, accusing him of using excessive force.