Teacher’s Note Goes Viral After Complaining About The Smell Of A Black Student’s Hair
POSTED BY WLAS October 15th, 2016 0 COMMENTS 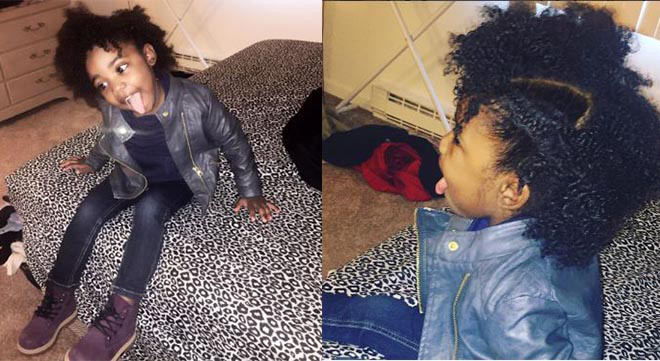 A Black Illinois mother sparked outrage Monday after sharing a note that her child’s teacher sent home complaining that the student’s hair “stinks.”

Tionna Norris is the mother of 3-year-old Amia, who attends Raggedy Anne Learning Center. In the note sent by a Russian teacher named Carol, she claimed Amia’s classmates also complain and tease her because her hair smells from a strong scent of coconut oil.

“I understand the necessary [sic] of coconut oil on Amia’s hair,” Carol’s note read. “But please do not use as much. The children were complaining that her hair “stinks.” If you have to apply this daily — please do so lightly, so the kids don’t tease her. Thank you for understanding.”

Norris posted an image of the letter side-by-side with a snap of her daughter’s fresh-looking curly and heavily moisturized hairstyle. She captioned the photo by confirming that she has no intention of taking the teacher’s advice. She warns the teacher that she going to continue to apply the same amount of coconut oil because “y’all gone feel that black girl magic. Sincerely, unapologetically black mom. P.s. Coconut oil has no stinky smell.”

Yahoo.com notes that Norris is the only black student her class at the learning center, which adds another layer to the issue. “This is why I make it a point to keep her hair natural and tell her yes she’s different and it’s magical,” she wrote on Facebook.

She also took her cause to Twitter, where she posted, “Ill be damned if I carried a child for 9 months and push him/her out of my body and anybody tell me anything about how to raise my child.”

The photo, which has been shared more than 3,000 times on Facebook, has garnered mixed comments. Some say the mother is missing the point, and is allowing her child to be bullied by not reducing the amount of coconut oil she puts in her child’s hair. BTW, coconut oil does have a scent, and the scent can be enhanced if you apply copious amounts. Others agree with the mom, and have pointed out that the teacher should instead be telling kids not to bully others.

“Why is the ill manner of another child your responsibility? It’s absurd,” one commenter said. “I hope the teacher wrote the other kids parents about being bullies since she’s so damn concerned,” another echoed.

Norris wrote that she and her fiancé went for a sit-down with the school’s director to talk about the issue, where they learned that her daughter wasn’t getting bullied for her hair after all.

“In the conversation she explained the letter was never supposed to be offensive in any way shape or form, no one ever said anything to my daughter, and Amia’s teacher is just a complainer (she’s Russian). We had an adult conversation, and my daughter has many friends, so no I will not be removing her from the school. The teacher is also being disciplined,” she wrote in an updated post on Facebook.

“It was just something the teacher was not used to and thought it was heavy,” she wrote. “Do I still believe the teacher didn’t have ill intentions? Not for a second because the way she tried to talk to me about how she thought my daughter smelled (… she is the only person who felt that way) was absolutely and totally unacceptable, but Amia is deftly my child, her clap back will always be REAL!”