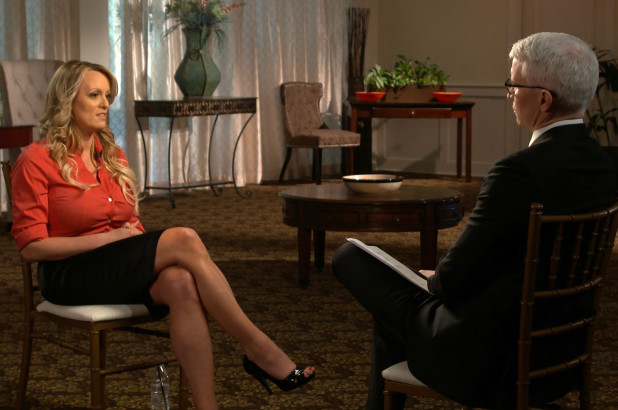 LOS ANGELES (AP) — An interview with Stormy Daniels delivered for “60 Minutes,” giving the long-running CBS news magazine its highest ratings in a decade. But the story wasn’t a slam dunk, either in the reaction it produced or getting on the air in the first place.

An estimated 22 million viewers tuned in Sunday to see the adult film star tell “60 Minutes” correspondent Anderson Cooper about her alleged 2006 sexual encounter with Donald Trump and the aftermath, which she said included efforts to silence her.

Daniels also said she swatted Trump’s behind with a magazine bearing his photo to take his boasting down a peg.

“I think people thought there was going to be a smoking gun here. Did we miss something?” Whoopi Goldberg asked Daniels’ attorney, Michael Avenatti, Monday on ABC’s “The View.”

Avenatti responded that Daniels’ account of being threatened to keep quiet about the affair represents a “big, big accusation” and a “critical” fact. In other TV interviews, Avenatti said he was holding back certain details of the alleged affair, including the contents of a CD or DVD he tweeted a picture of last week, for strategic reasons.

Jeff Fager, executive producer of “60 Minutes,” said the report included meaningful aspects of Daniels’ story, including what the $130,000 payment to her by Trump attorney Michael Cohen might mean in the context of federal campaign rules.

“I do think people probably had an expectation there would be more details of the affair, for example, which is not something we do at ’60 Minutes,’ not fitting for us,” Fager told The Associated Press. “We told her story in one part, and we examined why it matters in another.”

“If people were expecting more sensationalism, they probably were a little disappointed. … but 22 million people stayed with us, so I don’t think they were,” he said.

That’s double the season-to-date average viewership of about 11 million for the program, now in its 50th year.

The White House on Monday said President Trump has consistently denied the allegations leveled by Daniels, and Trump does not believe her claim that she was threatened to stay quiet over their alleged affair. White House spokesman Raj Shah declined to say whether the president had watched the broadcast. During Monday’s briefing, Shah said neither the White House nor Trump had violated campaign finance laws that restrict political contributions.

Earlier this month, legal filings on behalf of Cohen argued that he has the right to seek at least $20 million from Daniels for alleged violations of the non-disclosure agreement.

Daniels, who said she has turned down money for her story, was far more open and serious than when she appeared with ABC late-night host Jimmy Kimmel. She mostly stayed mum or gave Kimmel brief one-liners in response to his questions, indicating the non-disclosure agreement she’s challenging was why.

Fager said the decision to accept Avenatti’s proposed interview with Daniels was carefully weighed and came after show producer Andy Court and associate producer Evie Salomon met with her and after time-consuming reporting. Court, working with Cooper, had produced two other “60 Minutes” stories with the attorney.

“We weren’t in automatically. We wanted to know … whether there was a bigger picture question and not just a tabloid affair, and we found that,” Fager said.

Cooper has now interviewed two women in recent days about their alleged affairs with Trump: Last week, he spoke with Playboy Playmate Karen McDougal on CNN.

If the Nielsen company’s audience estimate of 22.06 million for the “60 Minutes” interview holds, it would mean more people watched the Daniels interview than the one “60 Minutes” aired with President-elect Trump and his family on Nov. 13, 2016. CBS says that telecast drew 20 million viewers.

CBS said the Daniels interview garnered the show’s highest viewership since November 2008. That’s when an interview with Barack and Michelle Obama aired shortly after his election as the country’s first African-American president, drawing 25 million.