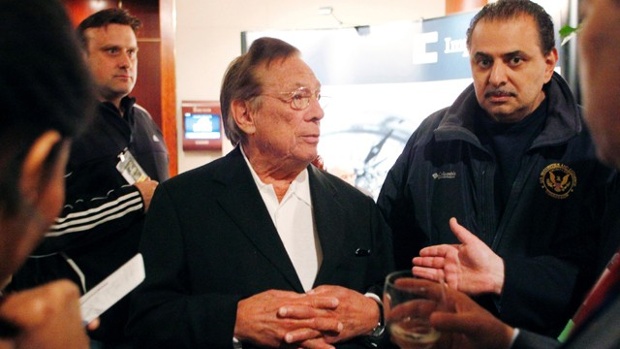 In a yet another audio recording, Los Angeles Clippers owner Donald Sterling purportedly explains why he infamously told a woman not to bring black people to his games: He was jealous that she was with black men.

The controversy surrounding recent racist comments attributed to Clippers owner Donald Sterling not only aren’t the first such charges directed at him, but are also hardly the first accusations of racism in the world of sports.

The recording released Friday — the second in two days unveiled by RadarOnline.com — allegedly reveals Sterling trying to add context to racist comments that got him banned from the NBA last month. That context, he purportedly says, was that he was trying to sleep with the woman he was talking to.

“The girl is black. I like her. I’m jealous that she’s with other black guys. I want her. So what the hell, can I in private tell her, you know, ‘I don’t want you to be with anybody’?” the man purported to be Sterling says in the new tape, according to RadarOnline.

“Then if the girl tapes it and releases it, my God, it’s awful.”

The new recording is of a phone conversation between Sterling and an unidentified person, made after the controversy over racist comments erupted last month, RadarOnline said.

CNN’s attempts to verify with Sterling’s representatives that he is on the tape were not immediately successful.

Sterling, an 80-year-old married lawyer and billionaire real-estate investor, has not released a public statement since celebrity gossip website TMZ posted a 10-minute audio recording in which he chastised a woman named V. Stiviano for posting pictures of her posing with African-Americans, including basketball Hall of Famer Earvin “Magic” Johnson.

Sterling made the comments during an argument with Stiviano, 31, on April 9, according to TMZ.

“In your lousy f***ing Instagrams, you don’t have to have yourself with — walking with black people,” he says.

“If it’s white people, it’s OK?” responds Stiviano, who is part African-American, according to the recording. “If it was Larry Bird, would it make a difference?”

Although the latest recording claims that Sterling was jealous, the tapes released last month by TMZ purportedly reveal Sterling being OK with Stiviano sleeping with black men.

Referring to Johnson, Sterling purportedly said: “Admire him, bring him here, feed him, f**k him, but don’t put (Magic) on an Instagram for the world to have to see so they have to call me. And don’t bring him to my games.”

Sterling also said, according to TMZ: “You can sleep with (black people). You can bring them in; you can do whatever you want. The little I ask you is not to promote it on that … and not to bring them to my games.”

One apparent source of friction, according to the pair on the TMZ tapes, was the man’s view that she “was perceived as either a Latina or a white girl,” and that people were calling him with negative reactions to her pictures with black people.

“People call you and tell you that I have black people on my Instagram, and it bothers you,” the woman said.

“Yeah, it bothers me a lot if you want to … broadcast that you’re associating with black people. Do you have to?” the man TMZ identified as Sterling responded.

The TMZ release triggered a firestorm that led to Sterling’s lifetime ban from the NBA and a $2.5 million fine. NBA Commissioner Adam Silver has asked the other 29 owners to force Sterling, the longest-tenured owner in the league, to sell the Clippers.