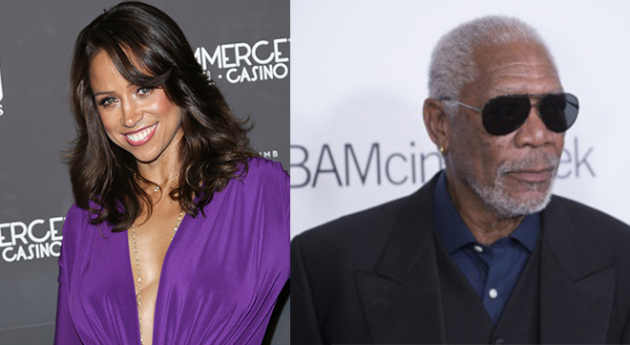 She’s at it again.

Stacey Dash is doubling and tripling down on her comments calling for the elimination of Black History Month and the BET Network.

Now she’s saying she wants an apology from her critics . And why is that, you ask? Because in a blog post entitled, “Twitter Haters, When Do I Get My Apology for Agreeing with Morgan Freeman about #BlackHistoryMonth?,” Dash claims the award winning actor has expressed similar views.

“When I spoke out on Fox News and on my blog about the need to get rid of BET and Black History Month, all the same usual Twitter haters came out of the woodwork to troll me and say all sorts of disgusting things about me,” Dash, 49, wrote. “Well, if you’re going to call me ignorant, stupid, and an Uncle Tom, you need to be intellectually honest and also call out Morgan Freeman.”

“What’s that you say? You didn’t realize that Morgan Freeman agrees with me that having a Black History Month is actually racist and a part of the problem in healing race relations in America?”

In the post, Dash included a video clip from 60 Minutes of Freeman’s comments regarding Black History Month. (Note: This video was aired in 2006. Morgan Freeman has not commented on the recent Oscar boycott.)

When reporter Mike Wallace asked his thoughts about Black History Month, Freeman responded with, “Ridiculous. You’re going to relegate my history to a month?”

“Damn straight, Morgan Freeman! Preach it!,” Dash wrote. “It’s time we decide as a society whether we want to care about race or not. Like Morgan Freeman says, there is no White History Month and there should be no Black History Month. Black history is American history.”

This post comes shortly after Dash referred to the recent Oscar boycott as “ludicrous” and claimed that BET lies to American black people.

“I think it’s ludicrous,” Dash, 49, said about the response to the lack of diversity surrounding the Oscar nominations. “We have to make up our minds. Either we want to have segregation or integration. If we don’t want segregation, then we need to get rid of channels like BET and the BET Awards and the [NAACP] Image Awards, where you’re only awarded if you’re black.”

“If it were the other way around, we would be up in arms, it’s a double standard,” she added before saying “there shouldn’t be a black history month. We’re Americans. Period.”

She wasn’t through. Here’s how she ended her rant:

“You want racial healing and reconciliation? You want true equality? Listen to Morgan Freeman – Stop. Talking. About. Race,” Dash wrote. “Like I said … so when do the Twitter trolls apologize to me? I’ll wait right here.”