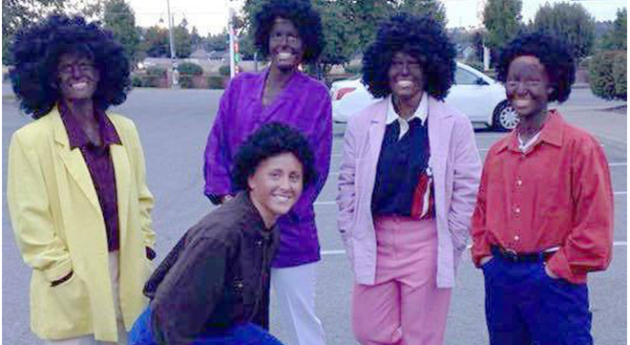 SPOKANE, Wash. (AP) — Five members of the women’s soccer team at a private Christian university in Washington state were suspended for one match Wednesday after a social media post surfaced showing them dressed in blackface and afro wigs.

Whitworth University, a liberal arts school in Spokane, said in a statement the players were suspended from the game following their actions at an unofficial team event Monday night. The players were attempting to appear as members of music group The Jackson 5 at an informal event at a local bowling alley, The Spokesman Review reported.

“In light of the impact that these actions have had on Whitworth and the greater Spokane community, we feel it is in the best interest of all involved to take this action at this time,” head coach Jael Hagerott said in a statement Wednesday. “While their intentions were not malicious, the outcome of their actions was painful for many in our community. We feel that this punitive response is proportional to their actions.”

His decision was supported by the university’s administration.

No further punishment will be taken by the university athletics department, but Whitworth’s normal student-conduct process is moving forward, KXLY-TV reported.

According to the Spokesman Review, athletic director Tim Demant and other university officials said Tuesday they met with all five players, whom they declined to name, and said the players said they were not aware of the racist implications of the use of blackface.

The university said in statement Tuesday that a photo of the players was posted on social media, and “constituents from both the campus and external communities have expressed concern with the photo’s content.”

“As a Christ-centered university that believes in the value of all individuals, we are seeking to use this situation as an opportunity to educate, redeem and restore,” Demant said in a statement Wednesday.