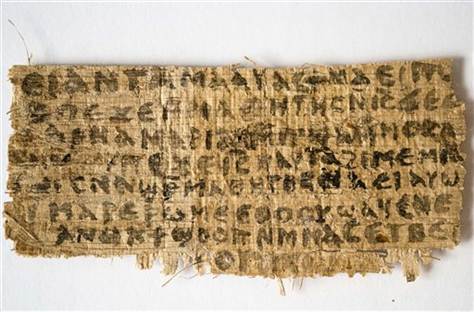 A copied error from an online translation of the Gospel of Thomas may be the “smoking gun” that strongly suggests the Gospel of Jesus’ Wife, a controversial papyrus fragment that supposedly refers to Jesus being married, is a forgery, scholars say. If the text is fake, it would represent an extraordinary tale of how an amateur with no knowledge of a long-dead language could fool some of the world’s leading experts by using a readily available Internet tool — and how scholars countered by rallying online to swiftly investigate the case together.

The business card-size fragment of papyrus stirred up worldwide controversy with a line of text that reads “Jesus said to them, ‘My wife …'” Many skeptical scholars suggested the document was a forgery in the weeks following the announcement of the discovery by Harvard historian Karen King — and their early suspicions have evolved into solid theories and findings as they talked through Facebook posts, blogs and e-lists.

One of the most compelling arguments for the fragment being a forgery has emerged from Andrew Bernhard, an Oxford University graduate and author of the book “Other Early Christian Gospels” (T & T Clark, 2006). He published an online paper last week pointing out a pattern of similarities between the Gospel of Jesus’ Wife and the Coptic Gospel of Thomas — similarities that include grammatical errors and line breaks found only in the online word-by-word translation of the Gospel of Thomas.

“It’s remarkable that a forger could have forged something like this using a simple tool on the Internet,” Bernhard said. “It’s equally stunning how quickly scholars could respond and analyze the text.”

All the grammatical anomalies in the Gospel of Jesus’ Wife suggest the writer was not a native speaker or even an academic expert in Coptic — the ancient, dead language of early Christians living in Egypt. Instead, Bernhard says that the pattern of errors and suspiciously similar line breaks suggests an amateur might have forged the “patchwork” text using individual words and phrases taken from Michael Grondin’s Interlinear Coptic-English Translation of the Gospel of Thomas.

“There’s this general pattern in that everywhere the Gospel of Jesus’ Wife could diverge from gospel of Thomas, it doesn’t, and in places where it does [diverge], it appears it’s following Mike’s Interlinear,” Bernhard told TechNewsDaily.

One the most suspicious grammatical errors in the Gospel of Jesus’ Wife appeared to be a direct copy of a typo in the PDF file version of the Interlinear translation — a connection that Grondin himself made when he was examining his translation. He shared that knowledge with Mark Goodacre, an associate professor of New Testament at Duke University, who had been writing up a blog post independently about the possibility of the ” Jesus’ Wife fragment ” being a forgery.

Goodacre and Bernhard eventually got in touch and agreed to coordinate the online publishing of their respective blog post and paper. Goodacre credits Bernhard with first making the connection between the Gospel of Jesus’ Wife and the online version of the Gospel of Thomas.

“I would have already put money on this thing being problematic, given the links between the fragment and the Coptic Gospel of Thomas,” Goodacre explained. “But the link with the online Interlinear version of the Gospel of Thomas really makes, for me, the case of authenticity a very difficult one.”

Both Goodacre and Bernhard cautioned that any final proof of a forgery must come from Harvard University’s chemistry tests of the fragment’s ink and paper. But if the Gospel of Jesus’ Wife is indeed a forgery, the scholars told TechNewsDaily that it would represent an eye-opening, first-time case where an amateur pulled off such a stunt — with more than a little help from the online Internet translation.

“They were able to mimic the word usage and grammar of Coptic convincingly enough so that I think a lot of people could have been fooled, including some of the most capable scholars in the world,” Bernhard said. “It’s a strange scenario in a strange new world where an amateur can fool the highest levels of academic knowledge.”

The availability of the online translation of the Gospel of Thomas may have provided the unwitting tool for an amateur to fool the experts. But the Internet also allowed scholars from many different fields to combine forces and focus their collective attention on examining the Gospel of Jesus’ Wife as soon as the news broke.

“Some people are experts in Coptic language, some people who are experts in the literary relationship among ancient texts,” Goodacre said. “It’s a combination of different voices talking to one another — things just move a little bit more quickly now than 30 or 40 years ago.”

Similarly, Bernhard confessed to being amazed by how quickly scholars had mobilized online to analyze the Gospel of Jesus’ wife. He wondered how anyone would have gathered all the Coptic experts in the world to do something similar just 20 years ago.

“To write this paper, I had to go through e-lists, Facebook posts, blogs, online articles — there was something like instantaneous international peer review,” Bernhard said. “It’s clearly a new world of scholarship.”

This article courtesy of Jeremy Hsu